Alex Kealy’s style of comedy much resembles a sixth former giving an awkward PowerPoint presentation. The content of his show wouldn’t be out of place in an A Level economics/politics classroom either: Gove, Boris and Corbyn all get a bashing; the disadvantages of a free market economy are discussed; the lies surrounding Brexit are satirised, and Nigel Farage is the target for a great deal of abuse.

So, yes, it’s comedy of an intellectual kind, with the laughs coming from Kealy’s deadpan, downbeat delivery. Known for the intensity of his self-loathing, there is a strangeness about Kealy’s performance- it feels like the process of standing before an audience is a kind of penance, as if he’s trying to atone for some long held guilt or shame, but then he does discuss his fairly horrendous experience of an all boys boarding school, so, who knows what’s been brushed under Kealy’s proverbial carpet.

Perhaps this exposes my intellectual inferiority to this shaggy haired sixth former (he’s not really 18…is he?), but I preferred the parts of his show where he discussed his desperation for a girlfriend or the bleak reality of his day-to-day life as a tutor to over-privileged children. Most of all I enjoyed the painstakingly prepared ‘slides’; the graphs, the mathematical patterns, the mock interview video. Kealy is also happy to field any comments from the audience; I imagine you could join him for a pint at the end of the show for an in-depth political discussion. He also responds well to the range of blurted laughs and guffaws from the room (isn’t it funny how his repressed style of stand-up creates a repressed sort of laughter in the audience?), usually this involves him clarifying exactly what provoked that response in the audience member, his OCD precision creating more laughs at his own expense.

Clearly Kealy knows his shit and is well prepared for this show, but I feel he either needs to relax and enjoy it a bit more (the audience laughed more when he did), or just really go for that self-loathing persona and try some on-stage self-flaggelation (that’s a joke), but in all seriousness there are times when his apathy suggests Kealy is bored with his own act, which is a shame as it brings down the mood of the audience. Cheer up Kealy! Here’s a graphic representation of your show that will hopefully make you smile: 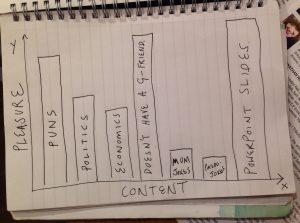