A Tale of Two Cities; one of Dickens’ greatest works set during the French Revolution and featuring one of the most ruthless female characters in history, Mme Defarge. It is here adapted by two companies, the Chung Ying Theatre Company and Red Shift Theatre Productions.

One can picture the excited conversations that must have happened before the devising process took place: a collaboration between Hong Kong and the U.K.; a tale of two cultures devising together to perform A Tale of Two Cities. Unfortunately, despite the laudable efforts of this cultural bridge building, this production is a disappointment. 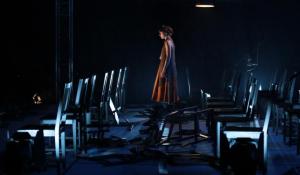 Clearly a lot of thought and money has been invested into this piece. The set is impressive; the space is filled with rows of chairs, with low slung lamps hanging over them. At each side of the stage is a row of microphones, with each mic stand lowly lit by another lamp. The atmosphere of intrigue and intimidation is set.

What happens next then is so frustrating. The story of the Defarges and their child, horribly killed under the wheels of the carriage of the Marquis de Saint Evremonde; the story of Lucie Manette and the love she feels for her fiancée, Charles Darnay and the lawyer, Sydney Carton; the stories of Lorry and Cruncher and Manette aren’t really enacted at all, instead the rows of chairs seem to block the possibility of meaningful interaction between the actors. This results in the dialogue taking place at the edges of the stage, in the low light, and for some reason beyond my fathoming, through the microphones. Why would you restrict such a fantastic cast to speaking so often through microphones at the expense of them actually interacting? 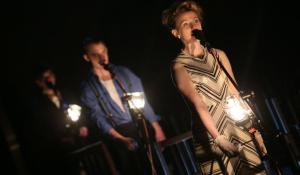 The end result of these creative decisions is a bizarre radio play. But a radio play of a Dickens novel would probably last hours and this production has condensed it down to 1.5 hours, meaning that if you have never read the novel you are unlikely to follow the narrative. It’s sad that a production with such potential has failed to deliver, and it’s also sad to listen to audience members leaving the theatre discussing how they did not understanding anything of what they’d just seen. A case of concept over content.

A Tale of Two Cities: Blood for Blood plays at Pleasance Courtyard until August 28th (not 24th) and begins each day at 14:40.