★★★★ An Inspired Piece of Theatre: Smoke and Oakum Rave It Up at Pleasance Courtyard 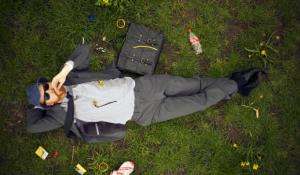 Alternating between the present day and the mid 90s, Happy Dave is both the story of a DJ and a commentary on today’s youth culture, or lack of it.

The rave scene in the 90s was a counter culture that really stuck it to The Man. Thousands of young people flocked to fields to blow their whistles, consume pills and rave until the sun came up. Happy Dave was at the heart of that scene, DJing to 10,000 people at a time, until the government made such gatherings illegal; placing a fine and a potential prison sentence on those found responsible for organising them.

Cut to the future and Happy Dave is just Dave now; living in the City and has sold his soul to the marketing industry. He’s a man who has lost his youth, his hair, but not his ardour for rave music, and, on a chance night out with his younger colleagues, he shows up their capacity to party. 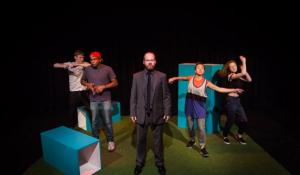 One night leads to another and soon they are hosting their own events; Dave becomes DJ Happy Dave again. It’s an inspiring piece of theatre; precise and slickly executed by Smoke and Oakum Theatre. The comedy is spot on, with a balance of banter moving in both directions; so Dave gets enough stick from the younger people for his age and apparent lack of career development, and Dave gives it back in equal measure; getting to deliver so many cracking come backs from X-Factor slights to pithy one liners about the younger generation’s thirst for promotions and property.

The script is fantastic but then so is the movement, music and lighting; this is what strobe lighting was made for! Perhaps next year they should develop this piece into an immersive event that takes place in the early hours, then we’d experience the exhilaration that the cast convince us they feel. Smoke and Oakum Theatre Presents: DJ Happy Dave in The Meadows…

Happy Dave plays at Pleasance Courtyard until August 29th (not 16th) and performances begin at 16:15.