★★★ The Kite Runner: A moving production which doesn’t quite take flight.

A heartrending story of a childhood friendship and a lifetime of trying to make amends. 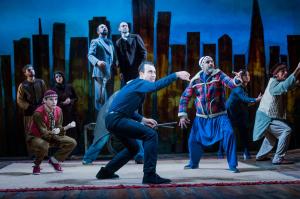 Khalid Hosseini’s best selling novel is adapted for the stage by Matthew Spangler, and the script remains loyal to the original narrative, producing a faithful rendering of Amir’s journey from a naive child to a wiser, chastened adult.

The first half traces Amir’s childhood in 1970s Afghanistan. He occupies his time reading and writing stories, despite his father’s wish that he play soccer with the other boys. His only friend is the son of his father’s servant, Hasan. A boy who adores and admires Amir, and is willing to do anything to please his master and prove his loyalty.

In a distressing moment, which is staged and handled with sensitivity, Hasan becomes the victim of a horrible sexual assault at the hands of one of Amir’s enemies, and seemingly so that Amir will not have to suffer the same fate. Sacrifice becomes an occurring theme through the performance, with Amir learning the length that others are willing to go to protect those that they love, although he himself takes a long time to be willing to make the same level of sacrifice. 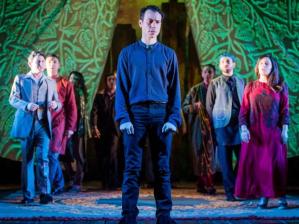 In many ways the Kite Runner is more harrowing on stage than on the page. There is no chance to put down the book or skim over any distressing details. Heavy subject matter shouldn’t in itself make a theatre experience gruelling, but, unfortunately, this production does seem to grind its way through Hosseini’s narrative.

The problem lies in its reliance on narration. Amir, played with unceasing energy by Ben Turner, is constantly on stage and constantly telling us about moments from the past. While this is how the novel is structured, in dramatic form having a narrator who keeps pulling the audience back in time only serves to detach us from the action. I longed to see the moments Amir described enacted, instead I felt as though I were watching the audio book being presented on stage. Instead of seeing lots of characters develop and unravel on stage, I had to listen to Amir tell us how they reacted and what they thought.

The highlight of the production, though, was in seeing Andrei Costin’s performance as Hasan. All of his moments on stage were filled with a purity that was entirely captivating. Everything about his person communicated the humble devotion that Hasan felt for Amir, and his performance carried the emotional heart of the production.

Overall, whilst the production captures the true spirit of Hosseini’s novel, the course of the performance is somewhat stilted by an over reliance on narration.

The Kite Runner plays at Wyndham’s Theatre until March 11th

Adapted by Matthew Spangler
Based on the novel by Khaled Hosseini