★★ Ambitious but Underdeveloped Homage to the Marx Brothers 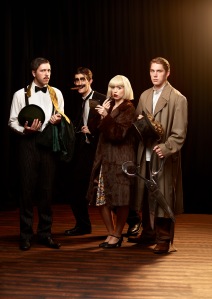 A word about the venue: it is tiny, hiding in plain sight in the heart of Theatreland, around the corner from The Mousetrap and within spitting distance of The Cursed Child.  I had certainly never noticed it before.  It is the performing space within The Actors Centre, founded in 1976, and in its current location for 5 years.  Its remit is to be a place for actors to work, train and take time out.  It has a rather charming student-type bar.

An appropriate setting, then, for a play about acting, and show business in general, which The Doppel Gang is.  Unfortunately the play fails to rise to the occasion.

As we enter, the set, lighting and music place us in the 1940s.  It feels like being backstage on the set of Dad’s Army or even Goodnight Sweetheart.  The spell is fatally broken when the lights go down and we are then faced with an old-style music hall comedy double act (Peter Stone and Jordan Moore) delivering a series of (deliberately) lame gags.

For this performance we both are, and are not, the audience. The real audience in the play is the sparse unenthusiastic crowd, whose lack of enthusiasm is the reason the theatre and its owner (Jake Urry) are on the verge of bankruptcy.  But it is also being played to us, so we also have to respond.  This effect is repeated through the course of the evening and it becomes rather wearisome. 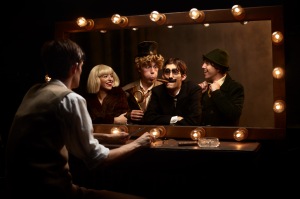 The first half of the show is basically a build-up to the second half pay-off of an extended homage to the Marx Brothers.  The premise is that the disgruntled performers will do one last show, based on a script they have discovered, to try to save the theatre.  They aim to persuade their war-befuddled audience that they have actually seen the real Groucho, Harpo and Chico on the London stage.  Even Churchill might pop in.  An extended tease, then, until the real thrill of seeing the Marx Brothers brought to life.  Sadly, the impressionism doesn’t work.  The company prove, as many others have over the years, how difficult it is to pull off the miraculous soufflé of Marxian humour.  Groucho’s gags in particular require a combination of energy, diction and comic timing, which Jordan Moore was unable to pull off.  A sub-plot plays itself out to little effect in the background.

There is no lack of ambition here.  The very concept of putting on a show about ‘bad’ performers is brave in itself.  There are multiple focal points for the action, intricate sound work, and elaborate choreography during the – too frequent – adjustments of scenery.  Some of these might have worked better on a larger stage.  There are occasional glimpses, too, of what might be the makings of a decent play – when the company find themselves in the middle of an air raid and in a remote corner of an Underground station the tension and interest ignite for a few moments; there is an all-too-brief note of London pride versus Northern grit from Rachel Hartley; an underdeveloped feminist theme. In fact, the whole piece felt underdeveloped.  Whether as a lost Marx Brothers masterpiece, or as a meditation on the multiple impacts of war, it seemed to be trying to cover more than it had time or space to do.

In the end, the company convinced neither as the Marx Brothers, nor as their ‘real-life’ counterparts.  Life imitated art as a small house clapped more or less politely at the end.

The Doppel Gang plays at the Tristan Bates Theatre until February 11th, 2017