★★★ Promises Promises – Fun and Lively, with More Hits than Misses 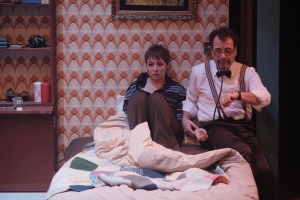 Despite an occasional lack of polish, this adaptation of Billy Wilder’s 1960 film ‘The Apartment’ hits most of the right notes.

Gabriel Vick stars as Chuck Baxter, a self proclaimed ambitious and resourceful employee at the bottom of the corporate totem pole. Chuck struggles to demonstrate his worth to the wider business, until he discovers that he can get ahead by letting lecherous executives convene their affairs at his nearby apartment for, ‘40 minutes, no 60 minutes, tops!’. So begins Promises Promises, here competently directed by Bronagh Lagan with the original music by Burt Bacharach and lyrics by Hal David.

This is an amusing, sparky musical that relies heavily on Vick’s Chuck to deliver both laughs and pathos in the slightly protracted first half. Whilst we root for Chuck to be recognised, there are occasions when jokes fall flat, more obvious in a small venue and when Vick breaks the fourth wall.  By doing so, and recognising and communicating with his audience, there are laughs and insights to be had as Chuck’s worries, hopes and sexual fantasies are played out by the cast. As he unveils his innermost thoughts; a skittish mixture of ambition, fear and lust, we are left rooting for him further, if only because the other males in the play do so much less to conceal their defects. As the play takes shape Chuck aims to win the heart of Fran Kubelik – the most developed character of a string of secretarial types playing ‘the other woman’ to a married man. Upon realising that like the rest of the office, Fran’s rendezvous are taking place on his, surely threadbare, bedding, Chuck is thrown into crisis.

Set within the small space of Southwark Playhouse this musical has the potential to overwhelm on occasion, with the band slightly too loud for such a space, and the more emotional ballads in danger of coming across as ‘shouty’. Nevertheless, Lagan uses the space well for a play which is packed to the brim with songs and the prerequisite, though not always desired, accompanying dances. Whilst a few too many of the songs provide little extra to the play, as if written based on a concept that the author then lost interest in, they do provide an opportunity for the cast, especially Daisy Maywood as Fran. She delivers wonderfully and is not the only performer to be helpfully accompanied by the, slightly haunting, off-stage backing vocalists.

The set is cleverly designed, leading the eye nicely to background details, and the 60s are apparent, at least to this Mad Men fan, from the costumes and hair. Whilst most direct references to ’60s things’ feel a little forced, Chuck’s prime location flat costing just 86 dollars a week did elicit some laughter, whilst the rampant office sexism which defines the play did elicit some unease – on occasion making it hard to tell if we were mocking or celebrating ‘the good old days’.

The second half gets off to a much stronger strong start with the introduction of a free drinking, strongly flirtatious ‘Marge’ (Alex Young) generating the most laughs of the night and an appropriate demonstration of physical comedy as she bounces into, and off of, the walls.  As past viewers and fans of the source material will know the play does then move on to portray some dark material and although the following saccharin, overly-cheerful singalong feels a bit off-key for 2017, Gabriel Vick and Daisy Maywood have enough charm to pull it off for all but the most militant audience members.

All seems to be coming together nicely in the musical’s final stages but then a sharp intake of breath cascades across the audience.

Is it the climactic final act delivering resolution and reward?

Is it a belter of the classic ‘Never fall in love again’?

Not quite. Instead part of the staging has broken and the cast are left unable to change props as stagehands visibly scramble to make do. Alongside the jokes which don’t quite land and the music which is clearly out of time on occasion, this feels like a play which could do with a little more polish. Overall, fun and entertaining for most, but probably one better to catch towards the end of its run.