★★★ Death is Swept off his Feet in this Musical Romance 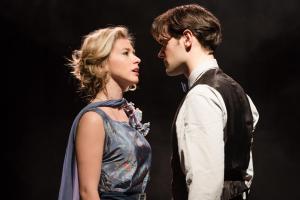 There is no reason not to like this show. It is a well-written, well-staged, expertly-performed adaptation of an Italian play by Alberto Casella, turned, with characteristic aplomb, into a musical by Thomas Meehan, who seems to have written the book for almost everything,  including Annie, The Producers and Hairspray, and the brilliant musical talent behind Titanic and Nine, Maury Yeston.

Grazia (the delightful Zoë Doano) has a disastrous accident, but survives because Death (the dashing Chris Peluso) thinks she is the most beautiful human he has ever seen, in all his millennia of collecting human souls, and he is infatuated enough to take human form and spend a weekend with the Duke, her father (Mark Inscoe) experiencing what it is like to be of fleshly form, and subject to all the delights and pains that go with it. Meantime, the rest of humanity is temporarily immune from death (causing God knows what imbalance in the world population, but let that pass) and survive all manner or accident and atrocity despite the overwhelming odds against it.

The ratio of song to dialogue is very high, and the melodies and orchestrations are lush and likeable. The choreography is nothing special, all movement being somewhat sedate and contained, but it is a ‘chamber piece’, in the words of the writers, a low-key musical for a small cast, so no worse than intended.

And yet? And yet. For your reviewer at least, it has to be said that there was something just a little tired about the plot, too many grabs at the low-hanging fruit of jokes about the commonplace references to death given new significance by his actual presence, and by contrast too little of genuine resonance, too little that seemed exciting or new, and too few of the songs seemed like they could live elsewhere. By all means go, but don’t expect to have your boundaries stretched.

Death Takes a Holiday runs at Charing Cross Theatre until the 4th of March, 2017.