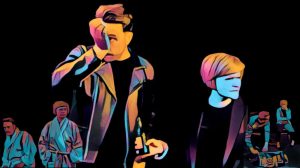 A hotel at the end of the world, The World’s End Inn, or ‘Worlds‘ for short. However it’s said, it’s remote, and the guests who choose to stay here have their own particular reasons for searching out such an isolated spot in the Irish countryside.

Martin Murphy’s new play is a cross section of all the guests in all of the rooms during one night at this hotel. And it’s performed by only two actors, who show remarkable skill in shifting between the very different roles they have to play. We have the travelling rock star, come to this place to search out a long-lost friend, a town planner and a registrar come to carry on their clandestine affair, a young couple come to seek out their fortune and a grandmother and her grandson come to seek respite. The range of characters provides variety and contrast, with some inclining towards comedy and others more bittersweet in tone.

The performance given by Naomi Sheldon and Andrew Macklin is excellent, they show off their talents with a range of voices and mannerisms to provide convincing characterisation for each role. The standout character must be the hotel landlady whose loneliness fuels her determination to keep the place running, foregoing sleep to chat with residents, and whose deadpan comments about ‘hobbyist musicians’ to the travelling rock star generate the most laughs.

The only disappointment is the final destination of this hotel exploration; for a moment I thought that all the guests would be somehow linked by the huge storm that threatened to hit, or perhaps the hotel landlady had a secret about the death of her husband that would somehow implicate her guests; I even thought for one moment that the young couple were going to rob the place and overcome the ‘impenetrable safe’ that was positioned in one of the guest bedrooms. In some ways it’s a shame that these narrative plants weren’t followed up, but the characters are entertaining in themselves and the piece works as a way of exploring a particular moment in time from many different viewpoints.

A Little Bit About Vaults Festival

From January 25th, hundreds of new shows explode across Vaults Festival at Waterloo. From top notch comedy to thrilling drama, from table-top stomping music to an eye-popping film selection – VAULT has it all. Dive in: check out What’s On in 2017, or you can find out more about VAULT.

Written and Directed by Martin Murphy