★★ Stunted by Design and Execution 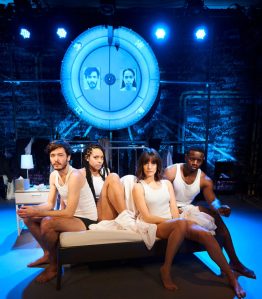 Despite, and on occasion because of its interesting format, this modern day adaptation of Arthur Schnitzler’s dissection of sexual norms and morals falls short of expectations.

Max Gill directs a cast of four at The Bunker, an atmospheric, subterraneous canvas which according to those seated nearby was formerly a much needed car park in the area. Upon opening, a single white bed has our attention at the centre of the stage, with a small table alongside it and a desk in the front corner. It is upon this unmoving image that 10 couples play a game of what is effectively sexual tag, minus any of the STI undertones that may imply.

La Ronde comprises 10 scenes, each involving a coupling of the cast, who act out everything from ‘a masochistic student and their cleaner’, to ‘a rock star and their ex-lover’, with the play beginning and ending with ‘a prostitute and their client’. The scenes don’t change, so much as they twist and turn into the next encounter, with one character departing and one remaining behind. In doing so a thread is neatly woven through the whole narrative so that each relates to the next and this is complimented by references to past actions and events.

There have been numerous La Ronde adaptations in recent years, though none have likely had the same reaction as the original play. That version, only first performed 20 years after it was written in 1897, gleefully trespassed across the social norms of the time and led to the play’s banning across the continent. One can imagine how a sexual narrative involving the ‘whore’, ‘poet’, ‘soldier’ and ‘count’ amongst others would have found itself easily outlawed. By contrast, pulling together ten couples from across 21st century London was always less likely to shock. Given the everlasting gossip of the tabloids, and ongoing investigations into the crimes of the powerful, it’s much less of a realisation in our modern age that people of all social status not only have sex, but break taboos and embrace their kinks in doing so.

Given this disadvantage, Gill aims to insert a parallel tale of luck and randomness, with the defining feature of this adaptation being that each of the four cast members may play either of the characters of each pairing. The four actors; two male, two female, two white, two black, wait patiently as a large wheel spins, at points excruciatingly slowly, before it decides who will play which role. This is definitely an interesting concept and poses a real challenge for the company who must be ready to pick up any one of an incredibly broad range of characters at any time. Although the wheel successfully provokes some non-traditional pairings and does well to throw up different perceptions of gender and sexuality in relationships, it is unable to move La Ronde beyond the significant challenges at its core. 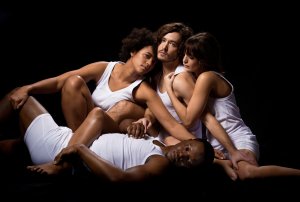 The plays are short and it is hard to see them as anything beyond vignettes or even skits. On occasion, scenes push for laughter when often the narrative dictates otherwise, with attempts at dark humour leading to slightly hammy reactions from the cast and confusion from the audience. Meanwhile tension is withheld from all but a couple scenes, with it becoming a waiting game as the two on stage dance around each other before the inevitability of their collapse into a raunchy yet thoroughly unerotic embrace. Having two characters on stage limits the direction the material can take and the underlying message, hinted at in the original, that people across the social strata may all hold similar or equivalent perversions, is less necessary in the modern day. 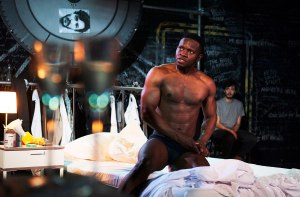 Whilst some in the audience were disappointed with the almighty wheel sidelining Leemore Marrett Jr, for all but a default appearance in the final two scenes, it did well to demonstrate the play’s commitment to chance. It was just a shame that the most intense emotional reactions of the night were had whilst Marrett sat quietly in view and the audience, in true game show fashion, oohed and mourned as the wheel took its slow time to slip past him. Otherwise, the ten scenes were a mixed bag both in writing and execution. A ‘patient and a doctor’ and the aforementioned ‘masochistic student and maid’ were particularly well delivered, but others lacked sharpness which seemed to stem from the actors’ multi-roling.

Whilst it claims to question ‘how desire defines us’, in the world of La Ronde it’s most often the case that desire is acted upon and almost always reciprocated. Whilst the wheel does add something to the night and the multi-roling is an impressive feat, the narrative and directing ultimately fail to break out of Schnitzler’s original confines.

La Ronde plays at The Bunker until March 11th.