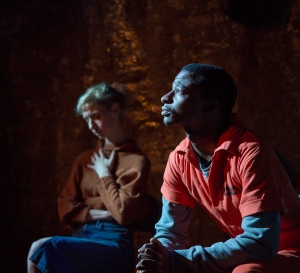 Four Bible characters are plucked from the pages of the holy book and thrust into the C21st by Old Sole Theatre Company. In the safe environs of a church meeting, the four characters share their painful pasts, not necessarily to open up their hearts to God – none of the characters seem in awe of the Big Man- but more as a cathartic therapy session.

We have the story of Isaac who is nearly sacrificed by his father, a duologue from Lot’s daughters who confess their incestuous relationship with their father, and the man who was crucified next to Jesus. It’s not exactly a light-hearted evening, but the writing is good and the performances are great. All four actors pace themselves well throughout long periods of speech, with each story reaching an emotional pitch but without overreaching and ending up in a mess of gratuitous pathos. What is interesting about having these characters share their past is that it implies they have all moved on, they have put it behind them and have now recovered and struck out on a new path in life. It doesn’t make listening to their stories any easier, but it does give a sense of redemption, which is rather fitting considering the territory we’re in.

The form is simple, the concept unusual, and there is the added bonus of hearing the vocalist Ivy Davies who provides soulful acapella numbers as way of transitioning from one monologue to another. The only element of this production which irks me is why put these characters on stage in the first place? It’s not the disturbing nature of their tales per se, but because I don’t think you’re able to leave the auditorium without feeling the Bible is one messed-up piece of literature. And, if the aim of a writing process such as this is to give voice to those who haven’t been heard, then perhaps one of the consequences might be to make your audience return to the original text and reconsider it in light of what they’ve seen, but I can’t imagine anyone wanting to return to the story of Lot. Although, having said that, the comparison between the Bible and Lot’s daughters in interesting; the Bible claims that Lot was seduced by his own daughters, in Testament the daughters recount the same story as an act of rape. Perhaps there’s an interesting post-show chat to be had out of this one, but all in all it’s a murky tale- one that’s both gripping and grisly.