Romantic love in a wartime setting is no new territory for the arts, with infinite pages of literature and poetry inspired by the extremities of the human condition in this context. Althea Theatre has created an ensemble piece which, inspired by real love letters that span multiple conflicts and eras, explores the universality of love when bloodshed is at its most futile, and communication at its most treasured. Written by Lilac Yosiphon, it takes the audience on a journey through multiple individual tales and explores the stories behind the letters, whilst celebrating the sentiment of love that traverses time, space and physicality.

As I was ushered from the bustle of the Old Red Lion pub (a welcome relief for a non-Rugby fan!) to the sanctuary of the theatre set, I was struck by the powerful simplicity of blank pages strewn across the empty stage. Unfortunately my optimism was short lived, because whilst One Last Thing (For Now) has a promising and rich premise at its core, it lacks the coherence and tone that it needs in order to deliver an emotional and pertinent impact. The most notable flaw boils down to a crammed script, where numerous distinct narratives are introduced and played out with little introduction, guidance or back story. Considering the emotional nature and powerful intent of the accounts, it’s near impossible to wholly relate to such a fast moving and chaotic variation of not only different characters, but different eras, continents, cultures and dialects. 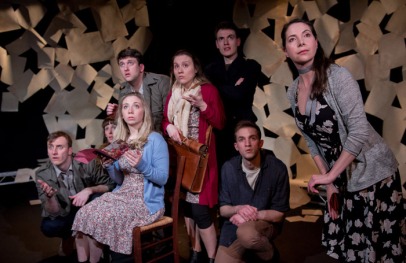 Whilst there are some poignant and deeply impressive moments of acting which invoke genuine sentiment, the overall tone is jarringly inconsistent and some moments feel unnecessarily satirical and over the top. Cole Michaels in particular is a real stand out in all of his distinct roles, and the intimate setting only heightens the gravity of his convincing and intense performance. The exploration of modern day technology as means of communication in contemporary conflict provides a refreshing perspective on what otherwise feels like an out-dated and idealistic model of romantic love, and this is something that could have been drawn out even more. The physical elements of the ensemble work were slick and impressive, but having the eight actors on (the very small) stage throughout the entire piece felt unnecessarily crowded, and at times just confusing.

One Last Thing (For Now) is definitely one to watch if the topic is of interest or sentimental catharsis is of appeal, but don’t expect anything ground-breaking in terms of depth of plot or innovative representations of relationships, communication and global conflict. Although there are some nuanced and interesting twists scattered throughout the 2 hour production, the audience has explicit emotion thrown all over them but the effect is lost when signposting is lacking and ideas are too abstract to be digested in such short windows of time. For this production to have the impact it deserves, less is definitely more.

One Last Thing plays at the Old Red Lion until March 25th.