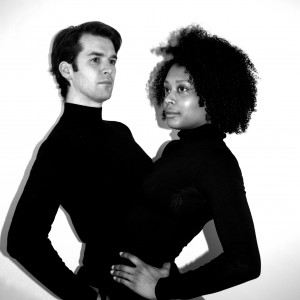 This play by Australian playwright, Lally Katz, is part of a double bill of plays directed by Liz Arday. The other play, Dario Fo’s A Woman Alone, complements the first and offers the viewer an evening of absurdism and surrealism.

In many ways The Eisteddfod has a much harder time playing against Dario Fo. Katz is lesser known in this country, and this play is one of her earlier pieces and is underdeveloped, to say the least. The title is unusual, being Welsh for a musical or theatrical contest, and is perhaps indicative of the various pointless references we find peppered throughout the script. Although, to be fair, the play is essentially about the mundane pointlessness of life, so one could say that the playwright has achieved her intentions.

The opening scene provides the most comical moment; two siblings, Abalone and Gerture, find out that their parents have been killed in a freak tree pruning incident. So if that’s the comic high you know it’s only going to descend from here on in. Unable to live in the outside world after their parents’ deaths, the siblings become agoraphobic and create a fantasy world inside their flat where they role play their adult desires, anxieties and aspirations. Abalone (Heath Ivey-Law) aspires to win the Eisteddfod so that he may claim 1st prize- a one way ticket to Moscow. Gerture (Leila Ruban) plays at teaching an imaginary class in her room whilst simultaneously struggling to deal with the collapse of her relationship with Ian, where Ian is really her brother pretending to be her lover.

The play is dark, but not darkly funny. Brother and sister demand to play out specific ‘scenes’, such as their parents coaching them or past sexual encounters, which hints at child abuse and definitely enters the domain of incest. The director’s decision to really exaggerate the graphic nature of the play’s sexual content is beyond me, I did not need to see some of sexual references mimed- the linguistic imagery was intense enough. Indeed, I haven’t felt so uncomfortable in the theatre for quite some time, which, I suppose, is an achievement; it just depends whether that level of discomfort is something you actively look for in an evening at the theatre.

So apart from incest, what could this surreal play be about? The focus to which all scenes returned was The Eisteddfod. Was this a moment from the past and a key marker for the siblings’ trauma? The gravitational pull of every action towards preparing for this event certainly underscores the siblings’ obsessive nature and helps to illustrate their claustrophobic lives. Their imaginative power was impressive, so perhaps this play speaks for the power of theatre as a means of escape, but is their imagined goal of a one-way ticket to Russia really about escaping their current situation or is it a symbol of escaping their lives entirely and meeting their death?

In it’s defence this play throws up a lot of questions, but more because it is unfathomable rather than philosophical. I admired the actors’ performance, and I admired the director’s resolve in staging this lesser known playwright, but I can’t say that I wholly recommend it to audiences.

The Eisteddfod and A Woman Alone play at the Etcetera Theatre until April 9th.