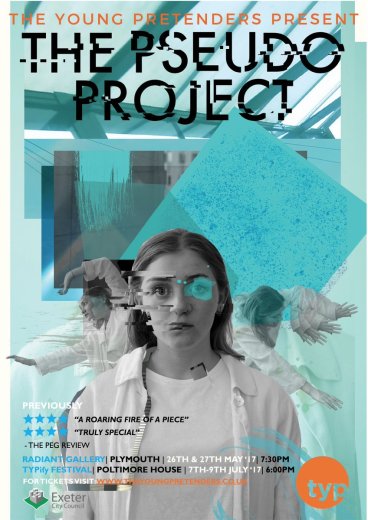 TYP’s ‘The Pseudo Project’ feels decidedly Orwellian: an impressively devised piece telling the story of a dystopian future in which humans are forced to live in isolated controlled pods, underground. Through the short bursts of ‘leisure time’ they receive daily, however, two of these individuals, Kuno and Nuala, begin to find deep solace in texting each other and talking of how much they dislike their isolated existences. The texts are delivered brilliantly, in disembodied, monotones from two other cast members, who robotically say the words with accompanying forced movements and the occasional announcement of ‘cat emoji’ or similar, making you as an onlooker feel quite reflective on how bizarre this ‘instant messaging’ format of communication can be. These interchanges are in fact so hilariously dull that once you’ve seen several of them, you almost feel like wanting to throw your iPhone in a wood shredder and never text again. It highlights how disgustingly reliant we are on these easy methods of communication, and how, unless we really consider it, we fail to see how empty such communicative strategies are.

The staging of the piece is a really strong element, almost a trademark strength of TYP’s productions by now. Being performed ‘in traverse’ with a small audience, it is indeed more of an experience than just a typical voyeuristic theatrical presentation. It’s also deliciously unnerving, as you feel a part of this awfully depressing world the characters are in, and totally powerless to do anything to help them. Brilliant uses of onstage microphones enable the ensemble to deliver various automated announcements, or even disembodied declarations, often in blind spots, making the experience even more immersive. The use of visceral and abstract physical sequences also gives another memorable aspect to the performance – and the fantastic use of props and general set design, suggesting some sort of white, uninteresting void, makes the piece even more compelling.

It has to be said that the scriptwriting in a piece devised by a cast of 16 individuals is staggeringly good – the speech is often profoundly poetic and never seems forced or contrived. Constructing such a complex plot as this is difficult in a solo format, let alone in a group, and in addition to this strength the overall ensemble performances are of a notably high standard. The piece is very well realised, no doubt greatly due to Lucy Hirst and Ben Philipp’s brilliant directing.

At the same time, if the devised nature of the script is one of the production’s strengths, it is also one of its weak points. From the midpoint onwards, the accessibility of the plotline diminishes, and the awesome set-up seems to have a less superior pay-off. It’s still very good and certainly thought provoking, but it seems as the piece becomes more abstract, and reaches a point where a climax is more or less expected, the plot seems to tail off to an unexpected plateau. This could of course be deliberate, and if it is done with the intention of being open to interpretation and thought provoking, then it certainly works. Perhaps it’s the feeling that the opening scenes, so clear cut, detailed and specific in their presentation, almost seem as if they are working towards something else, and then when the volta of the plot occurs, it isn’t quite the conventional format some may be expecting. That said, I’m all for unconventional, and this doesn’t change the fact that ‘The Pseudo Project’ is a brilliant and important piece of theatre. Beautifully cynical with a cutting satirical edge to every moment, it’s an undeniably highly impressive piece of social commentary, and what’s even more astounding is that this is devised by young people who, if this is anything to go by, seem to have a far better grip on the ugly side to our technological reality than some adults may do. TYP once again delivers a brilliant piece of theatre that is sure to inspire and amaze. Indeed, with its utterly relevant themes to our current technological age, viewing it should almost be considered a compulsory experience.

TYP’s second run of THE PSEUDO PROJECT is being performed from the 7th-9th July at Exeter’s Poltimore House, as a part of the brand new youth arts festival TYPify.

You can get tickets here:

Take a look at TYP’s website to see what they’re up to next: http://www.theyoungpretenders.co.uk