★★★★ Musical Melodrama for all the Family 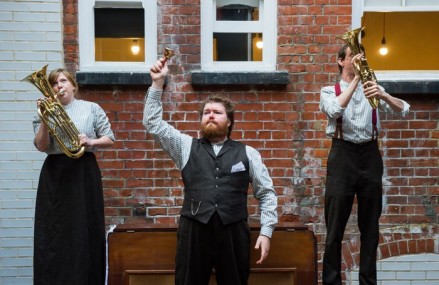 London 1886. It’s the year of the Great Flood. We see a tiny baby washed ashore and a lover swept out to sea on the day of his wedding. We travel forward and backwards in time, moving between Cornwall and London, and exploring both the grubby and more salubrious streets of Victorian London.

The vast scope of this story is set upon the tiny courtyard stage at the Battersea Arts Centre, and is performed by the loveable Little Bulb Theatre Company. Known for their musical talents and their larger than life characters, Extravaganza Macabre ticks all the Little Bulb boxes. We begin with the trio of actors bobbing onto stage like a mini brass band before launching into their melodrama of a musical. The cast of three populate all the characters in this tale, switching between lovers, maids, urchins and evil lords, with lightning fast costume changes. Although, be prepared for a light spot of audience participation as at moments the story spills out beyond the cast and into the audience.

Music, song and a good dose of slapstick comedy, this show is perfectly poised to provide an evening of family fun. All the actors seem to be enjoying themselves too, none more so than Alexander Scott who lovingly hams it up to provide the audience with both the show’s narrator and a seriously villainous lord. Clare Beresford brings a cheeky sweetness to the mix with her role as the innocent heroine and the winning street orphan- she can also seriously belt out a tune. There were so many moments which brought the audience together in laughter, but Dominic Conway’s stint as the clairvoyant lady’s maid was the character who had us wiping away the tears.

It’s a mark of its success that the show has returned again this summer, having been devised especially to launch Battersea Arts Centre’s Courtyard last year. What’s fantastic about this space is that, if you didn’t know how new it was, you’d think it had always been part of the building. It’s a unique and intimate space with walls made from a bold mix of old red and shiny white bricks, trapdoors and surprise entrances and exits spread across three levels. There is no better way to support the ongoing reconstruction work at the BAC than attending this fantastic show in this new space.

Word of warning, this performance takes place in an outdoor courtyard so be prepared to watch in the rain!