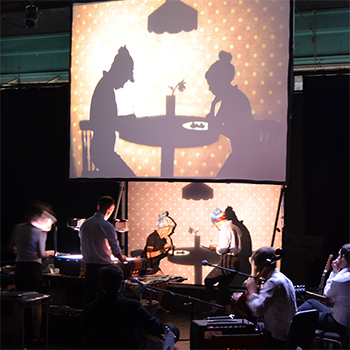 After smashing the Fringe last year, Manual Cinema return for their second year with the sweet coming of age story, Lula Del Ray.

Most people will start by describing the work of Manual Cinema as shadow puppetry, which it is, but it is also so much more than that. Multiple overhead projectors create a real cinematic experience, while live actors add prosthetics to enhance their silhouettes and  interact with the story unfolding on the screen. There’s also beautiful live music and a rich sound design to add to the story of Lula, who lives on a lonely satellite field in the middle of a desert. The isolation of Lula and her mother is intense, almost slowing the overall pace of the narrative at times, but when Lula falls in love with the soulful music of the Baden Brothers she decides to runaway to the city to hear them play live.

The narrative itself is simple – less magical than their previous work Ada/Ava – but Lula’s adventure to the city provides some moments of high tension and comedy, and is satisfyingly resolved at the end with Lula coming to understand more about herself and her mother. For those who have never seen this company in action, Manual Cinema needs to be seen just to appreciate the skill and complexity of their ways of working.

Lula Del Ray plays at the Underbelly, Med Quad throughout the Fringe (except 14th and 29th).