If you’ve ever studied comparative literature, you’ll know that it involves finding the links and connections between texts; seemingly any texts can be linked. In a similar fashion, Sh!t Theatre have tried to find the links and connections between Dolly Parton, Dolly the cloned sheep, a tattoo parlour and a scientific research unit which studies the rate of decomposition of human flesh.

Hmmm. Too weird, you say? Well yes, it is quite a strange experience but it’s also entirely unique – an idea that this double act, Rebecca Biscuit and Louise Mothersole, keep on returning too. They certainly do love Dolly Parton and they share with us their findings of a visit to Dollywood, the theme park built by the Country & Western singer to celebrate her music, her family and all things Tennessee. Sh!t Theatre’s documentary style presentation of their visit is entertaining and informative, using lots of images and lots of funky physical movement to relay their ‘findings’, i.e. there really does appear to be a lot in common between the two Dollys. 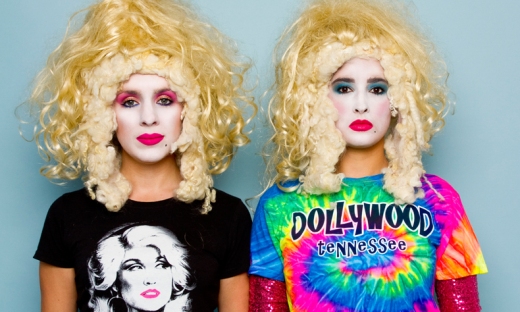 The majority of the audience were Dolly (Parton) fans too, and enjoyed the use of her music and interviews as well as the numerous boob jokes, particularly when Biscuit and Mothersole dress up as giant individual breasts and pop pink balloons. Still too weird, you say? Well yes, but that’s the charm. There is much to glean from this show, although the silliness stops you from over-thinking it. You can’t help but think about the Parton ‘clones’ who dress up like the singer ensure that her brand is perpetuated, and yet nothing can truly least forever- just like the sobering pictures of the human corpses in the research centre. However, in all honesty, I think most people were a bit disconcerted by the cadaver pictures.

Cadavers aside, it was a gleeful hour of fun. It’s probably best appreciated by Dolly (Parton) fans, although Sh!t Theatre are a bit of a Summerhall powerhouse so they’re worth checking out for their performance style alone, which I’m pretty sure is what the two boys were doing who were sitting next to me. Upon leaving the theatre they said the following:

Boy A: So who is that Dolly woman?

Boy A: It was quite good though.

Boy A: It was pretty weird, wasn’t it?

Dollywould plays at Summerhall throughout the Fringe (not 21st, 28th or 29th)