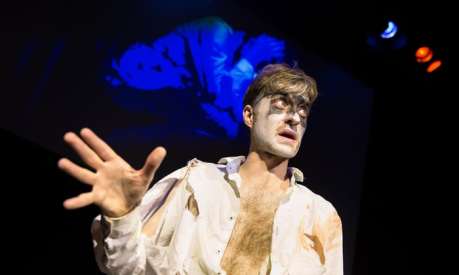 I have only ever seen Morpurgo in Austentatious– the improvised Jane Austen play, in which you can visibly see the pleasure he takes in throwing himself into the great unknown of improvisation. It is surprising, then, that his solo comedy show, Hammerhead, is so highly orchestrated and tightly controlled. It is so finely tuned that even the audience have scripted moments in this play-within-a-play where Morpurgo hosts his own post-show Q&A for a fictional production of Frankenstein.

The running joke is that Morpurgo’s Frankenstein is the most horrendous play to have ever graced the stage, and each scripted question rips him apart in terms of creative vision, performance skills or theatre reviews- or quite often something entirely divorced from the world of theatre altogether. There is something quite thrilling in having this type of audience participation, and the crowd enjoyed each tense moment when a mic was passed across the row and a paid-up member of the audience posed their question to Morpurgo. This goes to show that Morpurgo not only implicitly understands the form and structure of such a high concept piece, but he understands exactly how to take his audience along with him. And the audience certainly showed their adoration for Morpurgo by playing along and reading out the most unflattering questions without ever going off-piste and phrasing their own.

In between questions, Morpurgo reminds us of scenes from Frankenstein, where he plays all 85 characters, speaks in a dozen languages and remains on stage throughout the course of its 9 hour running time. The ridiculous intricacy of the show may well attest to Morpurgo’s genius but it is as much a commentary on actors’ egos, self-absorbed high-brow theatre and the mad world of crowd-funding sites. One of the best moments is when Morpurgo promises too much as a reward for the crowd-funding of Frankenstein and so has to write a B-Musical about a chartered surveyor to pay for the promised rewards. Of course, this musical turns out to be far more successful than Frankenstein which only pushes his neurotic fragility even further over the edge. There are so many choice moments in this performance that, even though it is so tightly scripted, you could easily watch it twice; the poster made in Microsoft Excel, the SatNav stage directions and the Samuel Beckett DJ experience to name but a few.

Everything about this show is perfectly poised and finely tuned. It is a guaranteed hour of laughs. There is just something in me that naughtily wants to see what would happen if an audience member didn’t play ball…