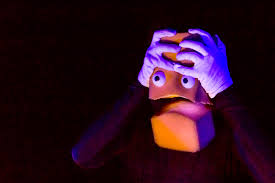 If you think there is nothing funny about sponges, you’ve probably never seen Bruce. With a Back to the Future-esque plotline this show follows Bruce, the sentient block of foam, through his life.

What is by far most impressive is how believable the characters are despite the production being so minimalist. A block of foam with googly eyes and a pair of gloves are all it takes for two puppeteers to create a comic spongy world. The show is easily immersive, so much so that it gets oddly touching; you will leave asking yourself how you felt so much for a sponge.

Despite all its successes, some of the humour is a bit hit and miss, coming off as cheesy at times. However, the overall charm of this production is more than enough to make up for this. Even if the humour is not everyone’s taste, you would find it difficult to be unimpressed by the production as a whole.

For something truly unique, see Bruce.