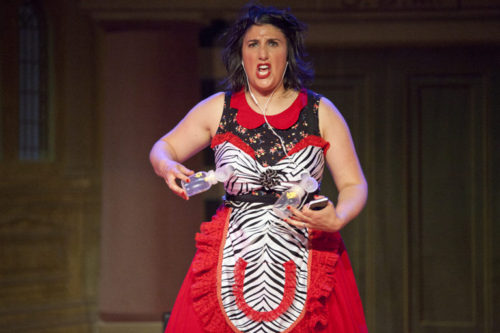 A new-comer to Edinburgh Fringe, performance artist Sara Juli tries to keep up with the off brand comedy that the festival is known for. A show about motherhood and urinary incontinence, it had the potential to flourish, but the lack of cohesion to the production meant the show was more a piddle than a stream.

In part, this was reinforced by Sara breaking the fourth wall. Whilst this worked best when she mothered the audience by offering them snacks, blowing noses and tying shoelaces, it worked less well when she peppered the show with comedic quips. It was unclear whether the show was supposed to be a comedy, or a more serious reflection on motherhood. Whilst Sara Juli does a hilarious rendition of Chandelier by Sia whilst attached to breast pumps, she also impersonates a cow being milked and falls to the floor crying.

The set design was also lacking; appearing as household objects strewn randomly upon the stage. This was only furthered by technical difficulties in Sara Juli’s karaoke segment. Nevertheless, the costuming was more promising, with various aprons signifying stages of motherhood being worn and replaced throughout the show.

Whilst it is clear that Sara Juli is a talented performer, the direction of the show is not as clearly diagnosed. Rather, like the show’s title, ultimately the audience remain tense.