★★★★ An Explosive Fusion of Documentary and Theatre 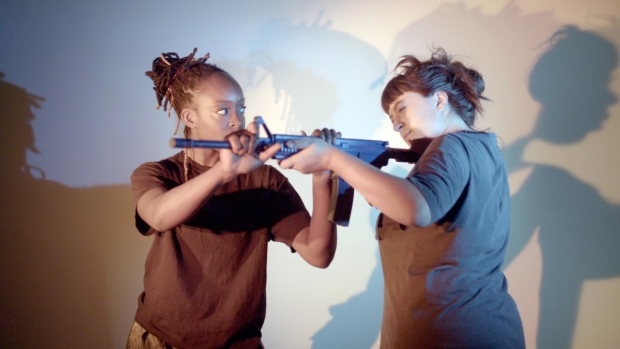 ‘If it’s not your thing, you are free to leave at any point.’
You’d be forgiven for feeling slightly dubious about a play that begins on this ominous premise, but multimedia theatre-makers Breach’s The Drill is certainly not for everybody. It’s here that its genius lies, however, as it explores some really interesting themes and culturally relevant ideas in such a creative and innovative way that a divided reaction is to be expected. Although a unique and unconventional form of theatre, it gives a genuinely entertaining and curiously moving edge to what you’d expect from a traditional production, and I left Battersea Arts Centre’s New Committee Room feeling challenged and inspired, albeit a little jumpy!

The Drill explores the pervasive fear that is ingrained in today’s society, with particular focus on terrorist attacks in urban areas and the communication of looming threat levels. The narrative elegantly weaves very human and commonplace tales and woes into an immersive state of emergency and response. Mixing up documentary film and devised theatre, ‘rehearsal’ meets ‘the real thing’ as we are asked to confront the notion of ‘theatre’ in the context of violence and media coverage, and how fear bleeds into our daily lives.

The production clearly has space and scope to evolve, and its ambitiousness is reflected in the complexity and sensitivity of the subject matter at hand. Billy Barrett and Ellice Stevens’ writing is creative and relevant, but could feel more sophisticated and intuitive in parts. A few moments of poorly landed humour detract from the overall credibility of the characters, who are all crucial to the delivery of the narrative and overall impact. Broadly, the concept works really well though, and should be applauded for a refreshing and authentic fusion of art forms and political urgency.

Amarnah Amuludun, Luke Lampard and Ellice Stevens form a dynamic trio, and their fluid interaction with each other and the televised floating head figures helps to carry the narrative along and facilitate a multidimensional experience for everyone present. Through demonstration, storytelling, dance, meta references, classical symphonies and documentary the action gradually and intelligently escalates into more extreme representations of violence and terror, and as a result the room becomes the setting for darker and more sinister scenarios. The Drill ultimately asks us to reconsider how fear affects the way we live, and to what degree we should prepare for or detach ourselves from images on the news and the bleak future we are so frequently encouraged to picture. It’s by no means perfect, but elegantly and powerfully poses these questions in a way that is truly unique and provocative.

The Drill plays at Battersea Arts Centre until 17th Feb 2018