Simon Ward reviews The Sensemaker at The Cockpit Theatre 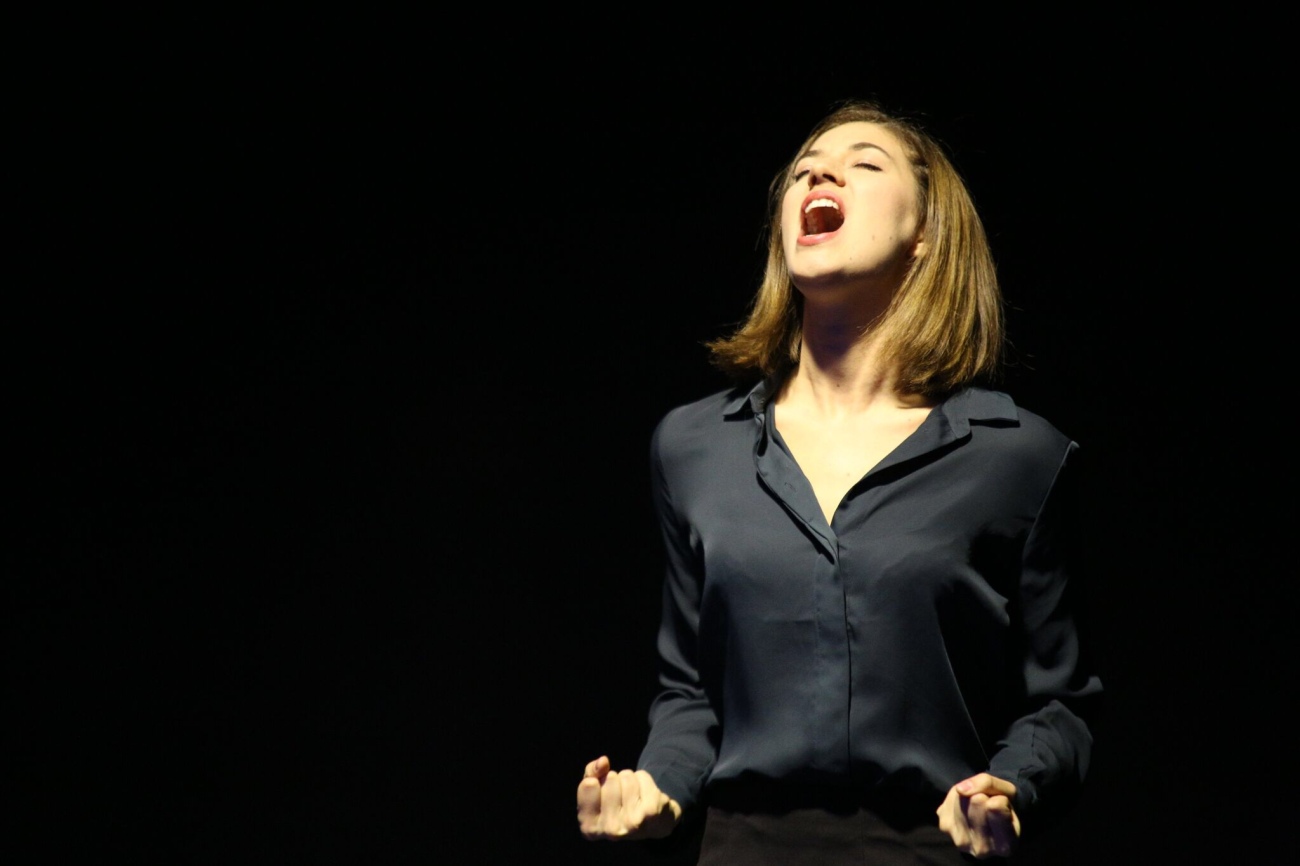 Voilà Europe! is a festival of theatre which celebrates Europe’s multicultural and multilingual diversity of drama, dance, music and more. It is running at multiple venues across London until 18th November, and on the evidence of tonight’s performance, it would be well worth checking out.

‘The Sensemaker’ is basically unclassifiable. It is a one woman show, the concept, choreography and performance are by Elsa Couvreur of the Swiss-based Woman’s Move dance collective. It does, however, feature an outstanding contribution from the voice responsible for all the recorded messages. It ranges from the hilariously funny to the toe-curlingly embarrassing and the downright disturbing. It is at once a celebration of the madcap absurdity of a continent containing more than 30 countries and probably twice as many languages as well as a grim reminder of the horrors wrought in this place when the laughter stops. It is a dance show in which the protagonist spends much of the time standing still. It is a piece of mime which can get very noisy indeed. It is both a dream and a nightmare.

Our heroine shuffles nervously onto the corner of the Cockpit’s unforgiving stage, surrounded on three sides. She is dressed as if for a job interview, clutching her handbag demurely, unsure whether to sit on the only available chair. We are engaged, as though fellow candidates also waiting our turn. In that awkward moment where we hope she does well, but not too well.

Instructions begin to be dictated from the old-fashioned telephone on the table opposite. It transpires that she has made a ‘request’ which is being ‘processed’ – the shades of Kafka, Orwell and The Prisoner collide when the machine starts to refer to her repeatedly by her number. She gets a moment to explain the request but it is of course lip-synched in another language (Swiss German) so I did not understand it but that is perhaps the point.

The recorded voice is an absolute masterstroke. The voice is exactly the one we hear on our phones, tubes and buses, with exactly the same imprecisions of tone, emphasis and language which may seem trivial but end up driving you mad. Also the choice of Muzak – the midi version of the Ode to Joy – amusing and witty as it is at first outing becomes, as in real life, increasingly infuriating. There is a lovely riff where our heroine gets deeply engaged with conducting the on-hold music, and is rudely interrupted by the return of the voice. We have all been there.

There are so many good things here – an extended sequence of lip synching to multilingual soundtrack – I recognised Ewan McGregor in Trainspotting, and what I think was a French jingle advertising Formica among many other delights – was made funnier still by the repetition of the same gestures for each of the contrasting pieces. When Elsa actually does get to dance she is very good, in spite of the machine’s instructions.

The funniest sequence was when the machine appeared to go wrong, and gabbled out an immensely long series of nonsensical instructions. Our heroine nevertheless mastered them and proceeded to deliver an accomplished dance routine to the tune of ‘I’m So Excited’.

The most poignant sequence was when the machine issued the instruction to get undressed. The sense of Nazi extermination camps was inescapable, and even the treatment of today’s refugees. When she is allowed to get dressed and finally hears that her request has been granted we are all complicit again in wondering whether it was worth it.

This is a work that was developed originally to run for 30 minutes. In this evening’s incarnation it ran for about 50 and I think it has potential to expand further. I, for one, will be looking out for future possibilities. If you get a chance to see this or anything by the collective, seize it with both hands. If anything proves that Europe is worth more than endless Brexit wrangling, this does. Voilà Europe, indeed!