This is my third year at Edinburgh Fringe, reviewing for the Peg. It’s been a wild ride, from drag cabaret to performance art about urinary incontinence, but I have never seen such an energetic performance as Matthew Robert’s one-man show Teach. 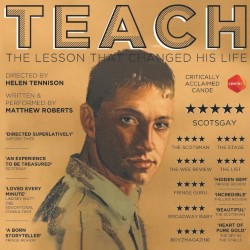 Matthew Roberts hails not from LAMDA however, but from a secondary school in inner-city London. He’s an English teacher. And here’s the crux of his show: Should he stay in a profession which saps his energy, threatens his mental health and wreaks his ability to sustain personal relationships, or should he go?

Roberts lets the audience decide whether he should stay in the teaching profession, through a show of hands. Many of whom are educators themselves. And it’s a hard question to ask, one without a clear answer. Roberts makes it clear that he is enraptured with his job. He is moved to tears when he recounts a teacher who has inspired him. When he prances and skips upon stage, he reminds me of the exuberant Mr G, a fictional teacher in Chris Lilley’s Summer Heights High. Mr G quits his job of course, albeit temporarily, stating that: ‘Shoot me for having a dream. Shoot me for giving the kids something to aspire to.’

And Robert’s exuberance too gives way to these same pressures, but unlike Chris Lilley’s character, it’s not funny. His performance is undercut with the violence afflicted upon him from the profession, the cuts and slashes from government austerity, the knife crime that knells his students, and the homophobic harassment that he experiences.

After the audience has made our final decision, Roberts does not indicate his. Nevertheless, our decision very much operates in a class-room scenario. We show our hands, we sing along with him to Animal Farm, and he calls us ‘his year nines.’ I suspect he won’t ever be able to leave his profession. And it’s a shame that he feels he has to choose. I find myself wishing, as I’m sure many whimsical humanities graduates do, that more politicians attended shows like this.