The Hunters Grimm at the Albany Theatre – 4 stars

Well that was strange. Of the many ideas to be inspired by the brothers Grimm folk tales down the years, this might just be the strangest.  The sight of Deptford at night—specifically its dark and miserable side-streets—doesn’t exactly conjure up the landscape of German fairy-tales, so to say that the cast have their work cut out for them in this ambitious promenade performance based on the brothers Grimm stories, is something of an understatement. In all logic the idea of a group (of mostly adults) traipsing along south London alleyways looking for a lost princess, really ought to be a disaster—but guess what? It’s actually surprisingly fun! 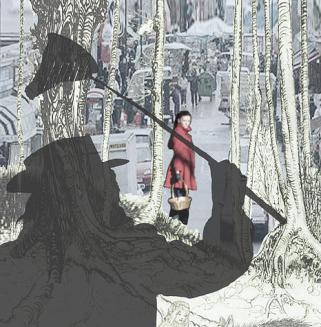 The show feeds off of its own perverseness. Its premise sets us up for this bizarre adventure by making the audience “story hunters” who are working for the brothers Grimm in search of a tale with a happy ending. Naturally, Deptford is the place to find it and once we’ve been briefed by the brothers off we go. Cue a series of unusual encounters in various locations, ranging from a rather unpleasant wolf-skin rug who, in a former life, had a penchant for dressing up as grandmothers and eating little girls, to a self-mutilating bachelorette whose foot won’t quite fit into a special slipper. It’s all very silly, and while it strays quite a long from the brothers’ original stories, it certainly adds something unique of its own into the equation. Unique, and utterly bonkers.

In fact, I really can’t explain how weird this show is. It’s no wonder the glum looking people pushing their trollies out of Iceland at 8pm were giving me strange looks, as I walked past wearing my green story hunter’s bowtie, with St Peter next to me playing the trombone and me singing along. Was that in the original brothers Grimm stories? Despite all of this, the experience is never an uncomfortable one—surreal in the extreme, but never disagreeable. And the quality of the production, given the nature of the piece, is actually of a surprisingly high standard.

Quite a few different local venues of various shapes and sizes are used during the adventure, and the shape of the piece is also imaginatively conceived, with the audience split into two groups whose stories converge at various points. The cast of actors is fairly substantial, and performances across the board are filled with the enthusiasm and commitment which the adventure needs to bring it to life.

Critics sometimes talk about the importance of maintaining theatre’s illusion during a performance, enabling the audience to “suspend their disbelief”. What utter tripe—The Hunters Grimm is totally preposterous and unbelievable throughout, with a scenery which constantly feels wrong and an audience in constant disbelief. Yet that’s really the point of the show, and in the end it’s a whole lot of fun. Clearly, this sort of performance isn’t going to be everybody’s cup of tea (or, if you prefer, gingerbread house), but if you think it sounds like fun then I promise you won’t be disappointed.