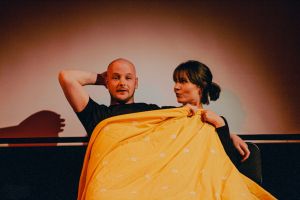 Simon Ward reviews Jo and Sam Find Themselves In Woking at The Hen and Chickens Theatre A bare stage, save for a couple of chairs and a projector screen. Suddenly the screen lights up, Edmund Jolliffe’s music kicks in and we are taken through a rather good whistle […] 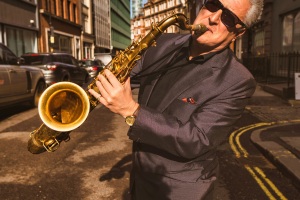 Simon Ward reviews QT Presents Ray Gelato at The Green Room Sometimes you find yourself in a world that you never knew existed. Or perhaps you suspected that it did, but didn’t think you could ever be part of it. Those movies where Fred Astaire and Bing Crosby […] 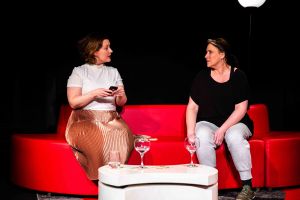 Simon Ward reviews BOOT at the Lion & Unicorn Theatre We open in an all too realistically-rendered anonymous hotel conference facility. Exactly the kind of place where school reunions and other excruciatingly awkward social events are held. The blandness of the furnishings and the harsh lighting do nothing […]

Simon Ward reviews Alarms and Excursions at Greenwich Theatre During rehearsals for this production of Michael Frayn’s collection of short plays and sketches, the playwright apparently wrote to the director to query whether the various technological devices which conspire to confound and torment his characters were now too […]

Simon Ward reviews Indecent Proposal at Southwark Playhouse Jack Engelhard’s bestselling novel was published 33 years ago. The movie version came out 28 years ago. So it is a curious decision to return to the notorious moral dilemma at the heart of this piece now, in 2021, in […]

★★★★ Pinteresque Menace for Our Times

Simon Ward reviews Snowflakes at The Old Red Lion Theatre The fashion over the last few years has been for plays to run for 90 minutes or so with no interval. There is a certain intensity gained by knowing that the full plot will unfurl without a break. […] 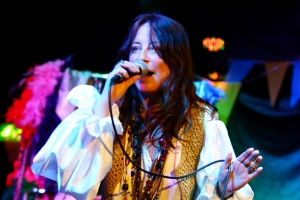 ★★★★ Janis Joplin reincarnated and rocking the house down

Simon Ward reviews Tomorrow May Be My Last at The Union Theatre This show – described as a ‘music-driven play’ – is not for the faint-hearted. It is a loud, sweaty romp though the all-too-brief life of its inspiration and its star – Janis Joplin – lovingly brought […]

Simon Ward reviews I Wish My Life Were Like A Musical now streaming on Kings Head TV It is over a year since I last wrote a review for The Peg and although I have really missed doing it, the idea of reviewing a streaming version of a […]

★★ Woman On The Verge Of A Nervous Breakdown

Simon Ward reviews Shoe Lady at the Royal Court Theatre There were high hopes for this – playwright E V Crowe‘s short career has been much lauded, and Katherine Parkinson has recently triumphed at the National in Home I’m Darling. All the resources of the Royal Court are […]