DNA at Arts on the Move Festival – 4 stars

Over the weekend, Devon’s summer arts festival Arts on the Move gathered a large audience to the gorgeous and derelict Poltimore House to soak up some culture in the sunshine. Not least among the large range of exhibitors and performers were up-and-coming Exeter youth company, The Young Pretenders. In their adaption of Dennis Kelly’s ‘DNA’, the group, directed by Exeter University graduate Lucy Hirst, were an energetic and original addition to the festival, drawing a huge crowd into the trees to watch the drama unfold. 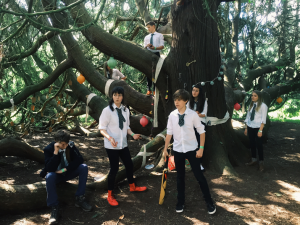 With an unusual and quirky stage – an ancient oak in the heart of Poltimore’s grounds – the young actors clambered around with ease. The detritus littered around the tree complemented the wholesome surroundings of the forest, with an accumulation of the kid’s belongings discarded at random or placed lovingly in a cubby-hole, giving the wonderful impression of a nest, the gang’s homely rendezvous.

Under the masterly direction of Hirst and assistant director Harry Kingscott, each actor delivered intensely believable and nuanced performances. Kiri Ley shines as the neurotic Leah, and Daniel Sved impresses as the brooding leader, Phil, both of them older characters who take on parental roles in this adolescent gang, but find themselves lacking.

Other strong performances include Gabriel Drake as the lovable Brian, Ruth Plumer as Jessica, and Anneka Thearle as Cathy, but really this ensemble gels together so well that it is unfair to single out individuals. Roles and relationships within the clique are confident and well-articulated without ever descending into stereotypes. The growing unease within the play creeps up on an unsuspecting audience, and there are clever and slick transitions which really build the tension towards the final, dark, twist.

With riotous applause at the end of both of their performances at the festival, it is clear that this young company are already a bestseller. With a summer course set to take place in late August, I can’t wait to see what these youngsters get up to next.  Be sure to find them on Facebook or at http://theatredevon.net/the-young-pretenders-theatre-company for more information.

Tagged as: Arts on the Move Festival, DNA