The Picture of Dorian Gray at Trafalgar Studios – 4 Stars

Armed with the pretentious opinion that no vocalisation can ever do justice to the beauty of Wilde’s words, and the somewhat contradictory conviction I was going to thoroughly enjoy the evening’s performance, I sank into the seats of Trafalgar’s small, intimate theatre. 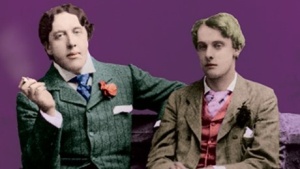 I admit I was filled with nervous anticipation. The last show I’d taken my now reluctant theatre-buddy boyfriend to was a confusing hour culminating in decapitation and necrophilia; I prayed the next hour would restore his faith. The Picture of Dorian Gray did not disappoint.

Merlin Holland and John O’Connor’s freshly adapted script cast the character of Dorian in an even deeper light as he cruelly manipulates his so-called friend and artist, Basil Hallward; adoring the portrait he painted more than the painter himself. The previously censored sections which Holland and O’Connor have reinstated highlight the depths of Basil’s devotion to Dorian, making the latter’s treatment of him even more abhorrent than otherwise.

As three of the four person cast created a myriad of characters around Dorian – effortlessly moving from French accents to Middle Eastern, Cockney to gentrified – the audience follow the protagonist from a life of innocence and naivety to debauchery and corruption.

Particularly noteworthy is the performance, or I should say performances, of Helen Keely who manages to make each female character more than the periphery interest they so often are in this play. In a narrative whose themes centre on male vanity, homoeroticism and the deterioration of Dorian’s soul, Keely makes the women he encounters more than just a means to illustrate his growing moral degradation. While I struggled to feel anything but contempt for Dorian, I certainly sympathised with Keely’s characters. 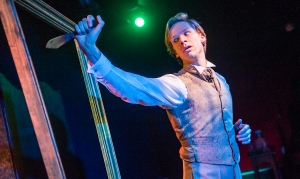 Guy Warren-Thomas’s Dorian Gray moved seamlessly from the naïve Dorian to the corrupted; condescending sneer in place when talking to Basil, and quizzical yet adoring simper whilst hanging of Lord Henry’s every word. This truly repulsive characterisation took my usual frustrations with the protagonist to new levels. Stripping him of any potential for pity or empathy, Warren-Thomas plays on Dorian’s narcissism from the off, exacerbating this as we move through the play and Dorian experiments with Lord Henry’s poisonous and hedonistic advise to “cure the soul by means of the senses.”

This freshly adapted version of a classic certainly adds a new dimension to the narrative. In an intimate theatre, I felt I was closer than ever to experiencing exactly what Oscar Wilde would have wanted his audience or reader to feel.

This one is definitely worth a watch.