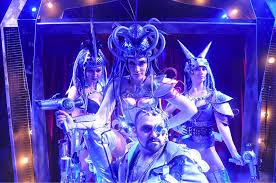 For a man perhaps not in the first trembling blush of youth, trucking down Upper Street singing ‘Glitter Boots set me free’ and ‘Let me be a Space Vixen’ was not my moment of greatest gravitas, it’s true, but this is a show where you check your dignity and your discernment in at the door, and get it exchanged for an ingot of solid gold joy.

Apparently advertised before it was written, and consequently having to be constructed backwards from a 30 word listing, this show is a ‘cult classic’ – one of those ones where people turn up specially dressed to demonstrate that they’re in the know, and exactly the kind of thing that can irritate the hell out of me. There were indeed a few glittered-up girls in the pub waiting to go in, but much of the audience must have been, like me, wondering what they were in for. With characters with names like ‘Jubilee Climax’ and ‘Chesty Prospects’ I feared a trip to ‘adult pantoland’. Now I know the truth, (and though it isn’t without a hefty slice of panto) I haven’t taken off my ‘Space Vixens’ badge, and next time, I’m going with glittery lipstick.

There’s no point telling you what it’s about, because it spectacularly doesn’t matter. Suffice to say that it’s set in a bar on planet Frottage 3, where three sassy Space Vixens arrive investigate a series of murders

by the Slingback Killer. It is camper than Titus Andromedon wearing a Scouts uniform (and if you even know who that is, you’re going to love it) designed and choreographed to perfection, and bound together by songs that hook you in like crack cocaine. For me, ‘Glitter Boots’ is the hit, sung by the Vixens when they first arrive in a cloud of dry ice, but ‘All I need is Disco’ is the other standout show-stopper. ‘Living in Hell’ is a delightful torch song, sung with true passion by the remarkable Jamie Birkett, reviving the Jubilee role she played in London in 2013 and Edinburgh in 2014.

No more to say. Just go.