A quarter mile long and packed with a myriad of human stories, the tale of the Titanic is epic in proportions, and yet Thom Southerland and Danielle Tarento’s production retells the tragedy with heart felt simplicity.

After its hugely successful run at Southwark Playhouse in 2013, the musical returns to London and finds a new port at the Charing Cross Theatre; a space perfectly suited to this scaled down chamber piece. On board we see a cross section of lives, from the busy serving classes and the hopeful 3rd class passengers, to the aspiring 2nd class and sweet, if oblivious 1st class celebrities. A lovely touch is that all the characters are named after a real person who set sail on the ship.

As the number of characters we meet is quite large the level of characterisation is quite narrow, although not shallow. The audience takes a shine to some of the more flamboyant characters such as Kate McGowan (Victoria Serra) from third class whose bold, last-ditch attempt to seek a better life in America succeeds in finding her a husband along the way. Not to mention Claire Machin’s portrayal of an American social-climber, Alice Beale, who flouts all the rules to dance with a 1st class partner.

There’s real power in the voices of this cast, and numbers such as “Godspeed Titanic’ convey the sense of excitement and awe that surrounded the maiden voyage and stops the performance becoming lost in the impending tragedy. It doesn’t stop the production from sometimes being lost in a sense of sentimentality, however. But the tone of the piece is pulled back from soppiness by the ongoing battle of wills between the ship’s financier, Ismay and the ship’s captain, E.J. Smith. Their arguments about the Titanic’s potential to be the fastest transatlantic ship propels us towards the looming iceberg, and brings us onto the feisty number, ‘The Blame’, which adds a bit of fire to the tragedy of the sinking scenes. 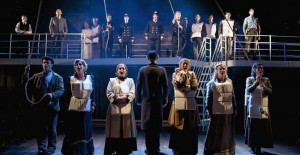 In the final scenes the lighting and sound effects convey the enormity of the Titanic’s demise, even if the staging struggles to meet our visual expectations. Having said that, the staging is on the whole imaginative and resourceful, and that tallies with the lasting impression of this production: an ambitious yet dynamic portrayal of an epic story.

Titanic plays at the Charing Cross Theatre until August 6.