It’s not often you get a chance to see a little-known 17th century French comedy put on in London, let alone one performed in French and English on alternate nights – so when the chance to watch The Doctor in Spite of Himself came up, I was understandably sceptical. But how wrong I was! This farcical piece about an unemployed drunkard, who finds himself invited into the home of a wealthy family under the guise of being a doctor, has with the help of a strong cast and an imaginative reworking of the script, really been brought to life for 21st century England. 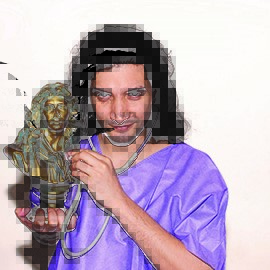 The play opens with our hero (or possibly anti-hero, it’s hard to tell) Sganarelle, in an altercation with his wife. He is lazy, drunk, spending all their money; she on the other hand, is fed up with his antics, and is not afraid to tell him so. In return he beats her, and this sets the whole train of events which follow into motion. For in revenge, she decides to convince two men looking for a great doctor, that her husband is the greatest doctor in all of the land. But, and here’s the catch, he’s extremely reluctant to admit it: they may even have to beat the truth out of him (which, of course they do). Faced with a battering, he relents and agrees to go and play the doctor to the daughter of a wealthy household, getting caught up in a range of internal struggles within the household along the way.

The plot is ludicrous, but in the best of ways. The cast get a huge amount of fun out of the material and it’s a pleasure to watch a group of performers, all of whom do exceptionally well with their parts, having so much fun on stage. Particular praise ought to be singled out for David Furlong, who plays the eponymous “doctor” against his own will. He is naturally funny, and has a particular talent for making his character’s mumbo jumbo medical speeches especially amusing – and convincing! His efforts to seduce the housemaid are also moments of real comedy. It’s funny, funny stuff. 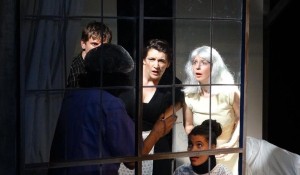 Sure, there are some parts of the performance which don’t quite come off as well. A few jokes which miss their mark, and a use of contemporary pop music which is fun, but a little odd. But for everything that doesn’t work there are a dozen things that do. Perhaps my favourite feature of the play is the way in which they break the fourth wall and talk to the audience. They do it at surprising times, very casually, and get a lot of laughs out of it. Yet they also do it in such a way that is entirely in keeping with the spirit of the play.

The company putting on the production, Exchange Theatre, have been bringing lesser-known French plays to the capital for ten years now, and their experience certainly shows through. It’s a real pleasure to see such an adventurous and interesting idea for a theatre company pull off something so well. It’s not perfect, I probably wouldn’t describe it as polished, but it’s really very fun, not too long, and overall, I’d say a great success. And that’s without even mentioning that they perform it in French too! I’d certainly recommend this to anyone who wants to see something funny, and perhaps a little out of the ordinary.