It’s starting to get cold and the nights are drawing in, so what better reason to spend a night at the theatre.
Here are our top 5 plays to see this October:

1. Lunch and The Bow of Ulysses at Trafalgar Studios

Witness a couple meeting for the first time, on a bench in a park near the sea.

Then find them again years later, and experience through them the paradoxical isolation and partnership that comes after two decades of coupledom.

Lunch and its sequel The Bow of Ulysses are two of Berkoff’s wittiest and insightful small pieces examining the pain and the humour within the most intimate of human relationships.

A nightmarish tale of love, betrayal and technological power from the multi-award winning makers of Translunar Paradise andBallad of the Burning Star.

Inspired by Edward Snowden’s revelations and state surveillance, Theatre Ad Infinitum conjures an Orwellian future where a totalitarian regime monitors the thoughts of its citizens through implants.

Daisy and Pablo are tired of being cynical, and of all this darkness. They’re sifting through Hallmark clichés, pipe dreams, song lyrics and political statements looking for a chink of light… Where does hope come from? Where can you get it, or get it back?

They’re not promising answers, but you never know, maybe something will happen if we are all in a room together.

4. Skin A Cat at the new Bunker Theatre

Every teenager thinks they’re the only one not having sex. But for Alana, it may well be true. She really wants to, but luck is clearly not on her side. Soon she can’t help wondering: Is it this tricky for everyone else? Because no one ever said it was going to be this complicated.

5. Shopping and F*cking at the Lyric, Hammersmith 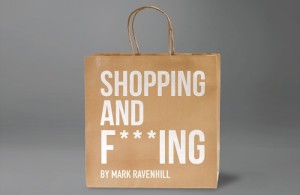 It’s summer. I’m in a supermarket. It’s hot and I’m sweaty. Damp. And I’m watching this couple shopping. I’m watching you. And you’re both smiling. You see me and you know sort of straight away that I’m going to have you.’

With a raw mixture of black humour and bleak philosophy, the play follows three disconnected young adults whose lives have been reduced to a series of transactions in an emotionally shrink wrapped world. A place where Shopping is sexy and F***ing is a job.

Tagged as: October, Theatre, What to watch