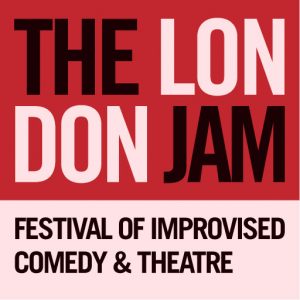 A week of improvised theatre is happening at the wonderful Wilton’s Music Hall. It’s all roughly planned out in advance though, isn’t it?

Honestly, it isn’t. From an improvised Ibsen play for the literary folk amongst us, to the straight up geek fest of an improvised Dungeons and Dragons, it’s a week of made-up madness.

The house at Wilton’s was packed out last night for the first evening of The London Jam’s yearly improv festival. And if you’ve never been to an improv show before then some of the finest improv artists are lined up in the week to come, so it’s strongly recommended that you book in advance.

The first night kicked off with Austentatious and Lights! Camera! Improvise! Both groups use the standard format of inviting titles from the audience before launching into a narrative with their 6+ (in number, not age) strong cast. Both groups produced hilarious stories, and you needn’t be an Austen fan to appreciate the first offering. My fellow reviewer has been forced to sit through countless period dramas, and enjoyed the mockery of a Jane Austen heroine in spite of this, perhaps because of this.

Austentatious worked around the title ‘Fear and Fascination’ to produce a heroine who lived in contravention of the No Hat Rule in her village. But, alas, she was found out and her fear of reprisal was realised in the ruthless cruelty of the local vicar; a man who loved to watch lambs put to the slaughter, twice. Her comeuppance was not inflicted upon her, however, until a romance was established between our hat-offender and a rich man (whose character was a dishy mix of Mr Darcy and Mr Wickham for P&P fans.) Needless to say the story was resolved in true Austen style; the troupe seem to be so in tune with one another that they presented a perfectly pitched- though very silly- regency play. 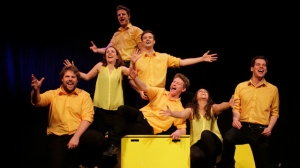 The actors of Lights! Camera! Improvise! didn’t ooze the slick togetherness of Austentatious, perhaps because they’re normally busy with the many productions of Mischief Theatre (the many plays which go wrong etc. etc.) BUT they did fill the stage with a love for improvisation which generated a completely different feeling in the audience- a true sense that anything might happen. It might go tits up, as the proverbial nautical expression goes, or, it might go swimmingly. And, the underwater detective film, Splash Gordon, fulfilled all the demands you could place on any under-funded B movie; noir-style detective mermaids investigating global rises in sea levels, inter-cut with a romance which overcomes inter-species taboos. Wow. What utter nonsense, but it was awesome. When it comes to improv, I’m a fly-by-the-seat-of-my-pants kinda audience member any day of the week.

Austentatious can also be found at Leicester Square pretty soon with nightly shows running from the end of January to the end of March.

But I’m afraid Lights! Camera! Improvise! won’t be on stage any time soon. Splash Gordon will have to fortify our memories in the meantime.