January Theatre Round Up

Here are 5 shows The Middle Peg team want to see in January:

Ivy, a redundant waitress, clings to her memories. Joan, an amateur painter, travels to Venice, the city of dreams, but there her dreams end. Lost in loneliness, both women can still smile. But what lies hidden beyond a brave face? Encounter Ivy & Joan each of them wants to tell you her story. Two intimate, funny and heart-breaking tales of loss.
The Backward Fall at the Courtyard Theatre

The Backward Fall is an awkwardly funny story of Etta and her family. She suffers from the early stages of Alzheimer’s, yet as her condition worsens, it is her family who descend into absurdity. Literally. The play is a hyper-realistic representation of a Sunday afternoon to which you are invited.

This piece is based on interviews and stories from Alzheimer’s sufferers and their families. The production company will be donating money from every ticket to charity and welcome any further donations.
A Series of Increasingly Impossible Acts at the Tricycle Theatre 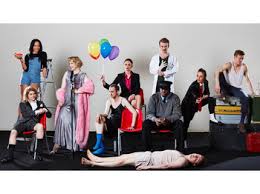 A Series of Increasingly Impossible Acts puts the audience in charge exploring the mighty failures and great triumphs of human endeavour. Each night the audience helps to choose the protagonist and the rest of the Secret Theatre Company puts them through their paces as they try to achieve the impossible in this riotous and uplifting show.

The Grand Tour at Finborough Theatre

France, 1940. Jacobowsky, a Polish Jewish intellectual, has been one step ahead of the Nazis for years. Stjerbinsky, an aristocratic, anti-semitic Polish colonel, is desperately trying to get to England. Jacobowsky has purchased a car, but he doesn’t know how to drive. The Colonel knows how to drive, but has no car.   When the two meet at a Paris hotel, they agree to join forces in order to escape the approaching Nazis. Together with the Colonel’s girlfriend, Marianne, they begin their perilous journey on the road to freedom.