Hamlet at the Barbican

What are the most quoted lines from Hamlet? From Shakespeare, even? “To be, or not to be: that is the question”.

So why not, as Lyndsey Turner does in her current production at the Barbican, whip the famous lines out of Act III and push them to the opening, thus providing instant gratification for Shakespeare and Cumberbatch fans alike. Well, perhaps, because the actual opening scene- featuring the ghost of Old Hamlet- provides the exposition for all the philosophising that Hamlet goes on to do. But who am I to quibble with a decision that puts the already titular character of Hamlet further in the limelight, especially when there are hordes of Cumberbitches salivating in the audience.

Not that I’m anti-Cumberbatch; he does a sterling job and, in actual fact, the production isn’t simply a Benedict Cumberbatch show. There are some fantastic performances, notably from Ciarán Hinds as the commanding, fearsome King Claudius, who also manages to move the audience with his repentance speech, “O, my offence is rank it smells to heaven”.

Leo Bill also gives a winning performance as Hamlet’s trusty friend, Watson, oh I mean, Horatio. Horatio is always a difficult part to play, serving often only as a character foil to the great Prince, but Bill really seems to give weight to this minor role. On the other hand, two minor characters that normally get to shine are those of Hamlet’s university friends, Rosencrantz and Guildenstern, but the comedy in their roles was overshadowed by the- exaggerated?- clowning from Cumberbatch during Hamlet’s ‘mad’ scenes. This, however, may be an unfair interpretation; Cumberbatch only needed to tweak the intonation of his voice to receive over-enthusiastic laughter from the super fans in the audience. 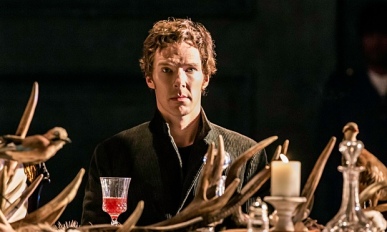 Super fans aside, this will prove to be a landmark production of Hamlet. Not simply because it’s the fastest selling London play in history, but because it’s accessible and entertaining. The set, in its epic proportions, is fantastic; the costume gives a nod to the geek-chic that Cumberbatch embodies; and director Lyndsey Turner really has made the most of the play’s inherent comedy. Yes, it probably isn’t as deeply political or thoughtful as David Tennant’s production back in 2008, but it’s definitely worth getting down to your local cinema when NT Live screens it on October 15th…unless you fancy camping with the super fans for one of thirty tickets released each day…