The Narcissist at The Courtyard Theatre – 2 Stars

This play is diverting and entertaining but entirely unremarkable – most notably let down by the hackneyed phrases and unoriginal dialogue of Gavin Davis’ script which is full of rehashed scenarios and family dynamics. 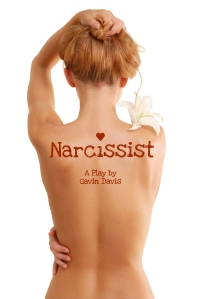 The play begins at an interview in a therapist’s office where dialogue between Chris Roger’s as the therapist and his patient Charlie, played by David Alwyn, intersperses with drama between Charlie and his family in a flashback type dynamic.  This effect is interrupted, however, when instead of remaining in his seat throughout and looking on at the drama from the outskirts (as he has up till the final 20 minutes) the therapist begins to weave between characters like an inexplicable and unnerving spectre…a curious directorial decision.

Less believable than the therapist’s inexplicable American accent, which fades in and out like an old LP, is the readiness with which Charlie accepts the therapist’s prognosis. His eyes are opened to the layers of repression under which his life has thus far been laboured, as well as the ongoing manipulations of his mother which dictate the course of more than just his love life. Instead of having any kind of emotional effect on the character, however, this disarming revelation results in Charlie going into some bizarre stream of self-analysis where he manages to not only identify all the issues and failings in his own life but also determine their roots in his ongoing search for motherly approval – quite a handy piece of discerning self-analysis after a few hours of therapy…

Back to the therapist. Reeling off technical terms and overwrought clichés as quickly as possible, Chris Rogers’ character didn’t quite give the impression of a self-assured professional that I suspect he was going for, more an actor racing through lines before the inevitable accent slip reoccurs. His performance was not helped by the distinctly unoriginal lines this play was peppered with, “it’s all a game Charlie, it’s your choice if you want to play it,” for example.

The cast performance was uneven, but Helen Bang as the narcissistic mother is suitably detestable and Mike Fenner’s sympathetic portrayal of the all-enduring, ill husband unable to resist his wife’s domineering character is extremely evocative.

Ironically, in view of the programme director’s note that in order to fully understand the nature of Narcissism “we must embrace every fault in our human chaos, not always blame our mothers, our childhood and parental values”, I couldn’t help leaving the theatre wondering what the writer’s relationship with his own mother was like…