Following hot on the heels of his success with Pornography at Sedos, brilliant young director Chris Davis has scored another hit with this extraordinary production of a play which caused such controversy at its first run in London that it was banned. I don’t know whether The Children’s Hour  actually created the ‘silly girls’ games lead to tragedy’ genre (only to be squeezed almost out of the nest by The Crucible) but this tale of a spoilt and hyper-active schoolgirl (Kimberley Marren) who accuses her teachers (Elizabeth Stevens and Emily Mc Donald) of lesbianism, leading to their ruin, is simply told and sparely staged, having the wisdom to rely on the enormous talent of the cast. 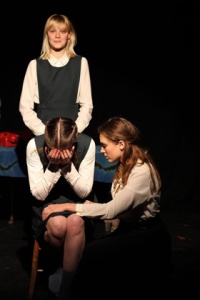 All are so strong that it seems unfair to single any out, but it must be done. Stevens has a depth and subtle nuance to her performance that would grace the professional stage, and Marren makes an extraordinary stage debut as the terrifyingly manipulative and self-obsessed agent of the teachers’ undeserved downfall. All the schoolgirls are played by adults, but every one succeeds in managing to evoke their much younger (I’m guessing they’re supposed to be about 10) roles with astonishing conviction; Marren’s performance is a tour-de-force, using a wide range of facial gestures and physical mannerisms to convey her character. Isabella Price, as her unwilling accomplice also deserves a special mention.

For me, the play itself is a little too brief to do itself justice; it is a shortened version of the two and a half hour original, but I have to say only the quality of the seating and the absence of an interval could lessen my appetite for the full thing. This is drama of great quality, and I urge you to see it.