How to win at the Edinburgh Fringe? With a weirdly wonderful musical ★★★★★

How To Win Against History 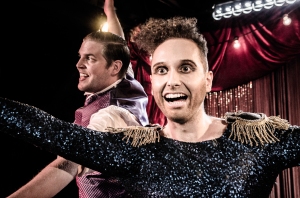 How To Win Against History is a three man musical which charts the life of Henry Paget, 5th Marquis of Anglesey. Regrettably, the full account of this man’s life was lost to the ashes, being as it was burned – every last photo, letter or written record – by his own family, who felt obliged to destroy all evidence of his (delightfully) deviant lifestyle.

Pulling back this man’s life from the fringes of history is the show’s creator Seiriol Davies. Himself an Anglesey man, one can imagine Davies bringing a fair bit of Paget sass and glitz to the fair Welsh isle. Just as Paget turned his estate chapel into a theatre so that he could showcase his own talents, Seiriol has created a show that is surely testament to his wit and sensitivity as an individual and a performer. He retells the story of Paget’s life from his Eton school days, through to his life as a travelling performer, his mounting debts and his early death, with each stage of his life turned into a fantastically ridiculous musical number, of a fashion that Paget would have surely approved.

The accompaniment is provided by one man, Dylan Townley, whose playful style adds to the storytelling as well as the comedy of the piece. And in terms of style the whole show is a wonderful mash-up of comedy drag, The Mighty Boosh and, I thought, Mel Brooks, although there’s so much to draw from this piece that audience members will see all sorts of influences.

Davies is also well supported by Matthew Blake, who takes on the roles of all the other characters that the Marquis meets. Indeed, as we are tongue-in-cheek told in one of the opening numbers, this show gives the audience exactly what they want; actors playing multiple roles, songs of just the right length, a quest, a happy ending, and, for this reviewer, just the right amount of audience participation, which will surely go down very well when it reaches the Edinburgh fringe next month.

How To Win Against History is only playing at the at the Oval House Theatre for the next few days, so catch it if you can. Or, like me, see it again at the Fringe where it plays at Assembly George Square. Quirky, silly, tragic. This wonderfully weird musical is surprisingly emotional and perfect fringe fodder.