★★★★ This Is What Fringe Theatre Should Be: Thought-Provoking Material and Arresting Performances. 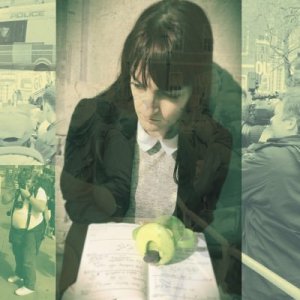 In all the fun of the fringe it’s easy to overlook the theatre productions that are doing something more than simply entertaining their audiences and trying to break even. A lot of theatre I’ve seen in Edinburgh this summer is pushing boundaries in terms of form, but Villain is very simple in its construction; a one woman show that Seeks to reveal the character of social worker, Rachel. What makes Martin Murphy’s play special is that it tackles the sensitive issue of responsibility in the field of social work; in particular, the social workers who find themselves embroiled in those horrific case that too often hit the headlines. What makes this play truly impressive is that it isn’t mawkish, it isn’t so desperate to convey a message that it loses sight of making good theatre.

And powerful theatre it is. Rachel is the designated social worker for a mother with six children by many different men; the family’s impoverished conditions make them a cause for concern and so Rachel goes to check in on them, but from outset everything appears to be fine. That is the crux of the narrative: the family that seemed normal, the baby that looked healthy, the new boyfriend who seemed questionable, and the social worker whose time was spread too thinly over too many cases.

Interestingly, the majority of the play revolves around retelling how Rachel arrives at this moment, and the defining feature of that journey is just how normal Rachel’s story is: university, post-uni job, dissatisfaction with job, and then the search to find something more meaningful. The overwhelming impression is that Rachel is a lovely human being, not angelic, but driven to do well and to do well by others. Maddie Rice plays her with an inviting friendliness that suits the intimate space in the Underbelly. She also infuses Rachel with a bubbly sensitivity, a character trait that is essential to her line of work, but also allows us to see the funny side of things in the rest of her life- whether that be office politics or messy nights out. And so we end up with a play that is surprisingly filled with humour, something important when the structure of the play keeps cutting to the present moment of crisis as Rachel’s case hits the headlines, and she is painted as a monster in the media.

Villain is a success because it so clearly achieves its aims; the audience comes away considering the real people behind those social workers who are demonised in the press, and it also creates an arresting piece of theatre.