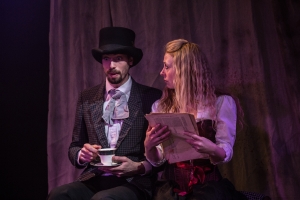 This is a cheerful and well-executed parody of Dracula – not a satire as the publicity suggests – which lifts its version of the story almost directly from the 1992 Francis Ford Coppola film, complete with the tacked-on romantic back-story, and then gives it a few deft comic twists. Dracula is rather a sympathetic character keen to lift the curse laid upon him by his wife who was fed up with him looking in the mirror all the time, and whose main desire is to become an English gentleman. Harker, by contrast, is a randy bachelor reluctant to leave Castle Dracula because of the delights of the three ladies who give him pleasure at night. At least, two of them are certainly ladies

Performing in the traverse, with the kind of minimal set that the King’s Head usually demands, the five performers get very creative with costume, props, smoke and light  – and at one stage, a puppet – to present a very amusing rendition of the tale. The multitude of characters require plenty of quick changes, which fast becomes a knowing joke in itself, ultimately one of the performers wearing half his costume for each of his characters, to the complete confusion of the other. Special mention must be made of Rob Cummings in the title role, who drove the play with his physical comedy and great warm talent, as well as coping professionally with a wayward moustache in his secondary role.

Though there are some good original jokes, (at least, I hadn’t seen them before) which take one by surprise, overall the standard of comedy is a bit more Radio 4/Fringe/University, and can at times seem a little bit run-of-the-mill. It is never dull, but neither did there seem any danger of anyone’s sides splitting.

That said, Let Them Call It Mischief is an energetic group to be congratulated for some excellent performances all delivered with great energy and aplomb, and anything which contributes to the gaiety of the world at this particular time (press night was the day after ‘9/11’) is hugely to be welcomed.

Dracula plays at the King’s Head Theatre until November 26th