★★★★ The Weight of Extreme Capitalism: Theatrical Prowess and Fiction in its Realest Form

Theatre Ad Infinitum’s mission is to ‘create theatre that examines social and political themes through innovative storytelling and bold experimental styles.’ Bucket List, their latest production written by Nir Paldi and currently touring the UK, accomplishes this and some.

A highly physical account of political corruption, justice and revenge, the Council Chamber of Battersea Arts Centre becomes centre stage to modern Mexico for two hours of ferocity and vigour. Accompanied by an impressive all-female ensemble of multifaceted characters, and propelled by the murder of her mother, teenage heroine Milagros sets out on a quest to wreak revenge upon those responsible for the injustices she has experienced and observed first-hand.

Brimming with passion and rage, and narrated with candour, Tamsin Clarke carries us along with youthful force, and pours blood sweat and tears into her performance. Borders of her reality are inventively manipulated, and almost Matrix-like scenarios are enacted on stage, feeling more adept for the big screen and owing credit to the writing, acting and choreography alike. Chess is a dominant feature throughout the action, both literally and metaphorically – strategy, conflict, hierarchy and fate fused in a web of social order and injustice. 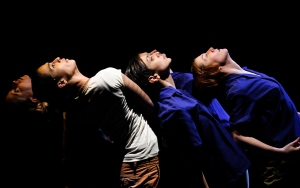 An exploration of corporate gain and callous exploitation of labour and rights, Bucket List confronts the uncomfortable with a captivating and conceptual narrative. But the stand-out element of the production is the masterly use of choreography, which plays a key role in the construction of Milagros’ world. The power and fallibility of the human body lies at the heart of this story, from profit-induced destruction through chemicals and labour, to sexual abuse, primitive violence, and the spirit and legacy which transcend the physical parameters of the flesh. Story-telling through movement feels entirely apt, and is an ambitious feat which is executed with style, creativity and impact. Along with live instrumental music, there is no shortage of evocative and spell-binding moments of poignancy, and Shamira Turner in particular provides marvellous comic relief through song and impersonations.

Powerless against the injustice and trauma on stage, audience members are forced to grapple with their own accountability in the arrangement of global capitalism, and as we empathise with Milagros and will her to succeed, we must question the cost of this complex bloodthirst. Is violence ever acceptable? An overriding concept of individual vs. the system is glaringly relevant in today’s reality, and Bucket List addresses topical discourse around inequality and division. It also prompts the question of human values and morality – what’s important in life asides from profit and money?

Bucket List demonstrates with creative flare the unthinkable distance between those in and out of power, focussing on relations between US and Mexico, but also fully applicable on a broader global scale. Sharing stories and listening to each other is more important now than ever, and that is why this is theatre at its best. As well as delivering an imaginative and moving experience, it will doubtlessly stir those watching from the everyday slumber of consumerism and remind us of the harsh reality that exists beyond the stage.