★★★★★ Life, Death, and Everything In Between 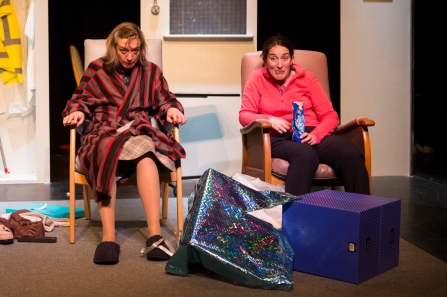 Over the next 35 years, the proportion of the world’s population over 60 years old is set to nearly double from 12% to 22%. By 2020, the number of people over 60 will outnumber children younger than 5. Inspector Sands’ The Lounge attempts to address the painful, complex and increasingly prevalent realities of individual and collective ageing, and the conflicts of bodily deterioration and identity in society.

Faced with three armchairs and little else, the audience at the Soho Theatre are transported to the stark lounge area of a nursing home somewhere off the A1. Described by staff as a ‘dead zone’, this analogy stretches far deeper than the extent of mobile phone coverage. Unlike a conventional lounge, occupants here are not waiting to board an aeroplane, or enter a doctor’s appointment. As the mediated external world trickles in through a TV screen, this lounge is for those inhabiting the conscious space between life and death. Implications are not subtle; this is somewhere people wait to die, a nowhere space, but this production challenges expectations and explores the paradoxical elements of vigour, hope, and meaning within a conventional place of degeneration.

Although a seemingly melancholic subject matter, it is by no means all doom and gloom. From the offset, the ever-present humour is witty, authentic and respectful, and our 97 year old protagonist Marsha Hewitt, from the confines of her armchair, becomes even more subtly captivating by the second. As Marsha, Lucinka Eisler is the only member of the trio onstage who embodies a consistent character for the majority of the action, and as the narrative unfolds and we are immersed into the workings, challenges and discouraging routine of the care home, she remains a steady anchor of simultaneous integrity and suffering.

With a concept rich in emotion and universal significance, it could be argued that for The Lounge to incite an emotional response is no difficult feat. However, this production could have easily been drenched in sentimentality, tasteless humour and an inconsistent tone. Lucinka Eisler, Giulia Innocenti and Dennis Herdman deliver The Lounge with the quality and credibility that it deserves. All three are deeply impressive in their physical capacity to embody the elderly with conviction and authenticity, as well as their seamless transitions into differing characters. In terms of narrative, the audience, unlike the residents, are not spoon-fed. There is space for interpretation, twists, and abstract metaphors within the accessible and compelling narrative, and it gradually builds to a moving climax which does justice to the journey we’re taken on.

The Lounge provides the perfect balance of humour and emotion, and approaches the past, present and future with intelligence and dynamism. It provides a warm, thought-provoking and emotional glimpse into a subject that is increasingly prevalent and problematic in contemporary society. As scientific and technological progression continues to flourish in the 21st century, the examination of ageing, mortality, and what makes life worth living will become ever more important. The Lounge opens up this conversation in a fun, engaging way, so join the conversation, but don’t forget your tissues.