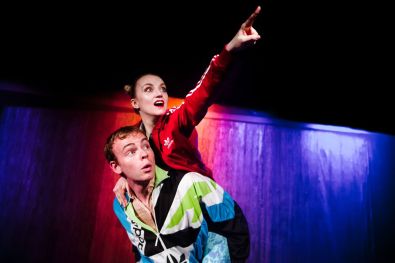 Enda Walsh shot to fame in 1996 with this In Yer Face play about two teens ripping up the rule book in Ireland. Pig and Runt have an unusual relationship; born within moments of one another they grow up together and form a relationship which blocks out the rest of the world.

For those who are seeing this play’s revival for the first time, the most striking feature is its form. Pig and Runt speak their own language and narrate the story of their lives in Pork Sitty (Cork City) through an artificial language which only the two of them fully understand. It’s a fascinating and refreshing experience, you work hard to tune in to their way of speaking and then quite quickly you see the world through the eyes of a pair of pent up seventeen year olds.

If all communication involves an element of translation, then Walsh takes it to extremes because these two wilfully isolate themselves from the rest of society- they do not want to be understood- and their language represents a failure of communication. Pig and Runt rampage through the streets of Cork, stealing want they want, fighting whom they please and dancing in empty nightclubs. In living in their own world they also live by their own rules, and maybe because their language distance us from what they do, the violence seems numbed. Pig smashes in other people’s faces like a Roy Lichtenstein painting “Ka-Pow” and then moves on to something equally anarchic. 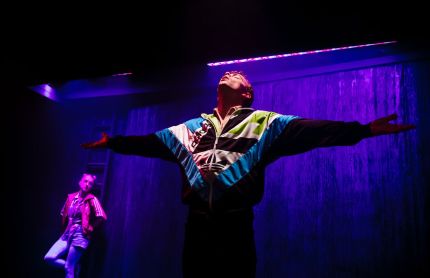 The anarchy takes huge amounts of energy to sustain and the two person cast, Evanna Lynch and Colin Campbell, burst on to the stage and bristle with hormone-charged energy throughout. While plays which operate in their own language are sometimes challenging for an audience, Lynch and Campbell grab you from the very beginning and pull you into their world. They are helped along by the excellent sound and lighting design which stands out against a minimalist set. The scenes in various nightclubs, particularly the transcendent moments in the Palace Nightclub employs a combination of 90s tunes and a laser-smoke light show which will take some audience members back to fond memories of the very worst of nights as an underage clubber.

Eventually, Pig and Runt’s highly asocial behaviour, however amusing at times, has to come to an end, and the play’s closing scene is surprisingly tragic in its tone and feeling. It’s a marvel that, against the odds, this singular pair of teens break through their own barriers  and form a strong connection with the audience. It’s heartening that, while the play is mostly about a failure of communication, there is hope that a common language is re-established at the end. This excellent revival is challenging, fascinating and still provocative 20 years on.