It is sometimes hard to adapt a book for the stage; taking the long descriptions of a character’s interior and presenting that visually is a challenge but it can be done – just think of how Simon Stephens adapted the unadaptable in Curious Incident. The task becomes even more difficult when you take a heavy weight non-fiction book such as Harari’s Sapiens: A Brief History of Humankind and turn it into a Drama, but David Byrne of New Diorama Theatre has done an admirable job in taking the key ideas of the original and bringing it to life in Secret Life of Humans.

Interestingly, he focuses on one historical person, Jacob Bronowski, and his involvement in the development of the atomic bomb, using this as a key example of how ‘progress’ doesn’t always move the human race forward. Bronowski’s portrait is kind and tolerant, imprinting the key idea on the audience that- as individuals and a whole race- humans step forward on the journey of life without ever knowing where their feet will take them.

If this all sounds a little too philosophical, then this is perhaps not the fringe experience for you. The tone is decidedly intellectual, not in the sense that it pursues highly complex ideas, but it does incline towards a lecture-style format at times. And, while there is a great deal of visual and physical elements to keep you engaged (the actors walking up the wall, for example) the weight of the material does at times strain against the overall direction of the piece. 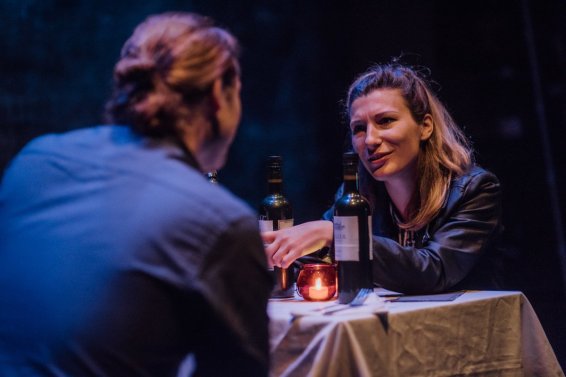 A nice touch that, whilst the focus of the secondary story is that of a male mathematician and anthropologist, Bronowski, the character who pulls us through the frame narrative is a savvy female lecturer. Played with rigorous energy and a good deal of intellectual underhandedness, Ava very coincidentally ‘swipes right’ on Bronowski’s grandson’s dating profile, and ends up having a one-night stand and a good root through the mathematician’s secret papers. Perhaps Byrne is suggesting that the next level of human progress – questionable or no –will be made by women.

If you’re interested in having your brain switched on during a fringe full of comedy then this is a great pre-dinner show; it will definitely leave you with a great deal to contemplate and discuss.

A Secret Life of Humans plays at Pleasance Courtyard throughout the Fringe (except 14th and 29th).