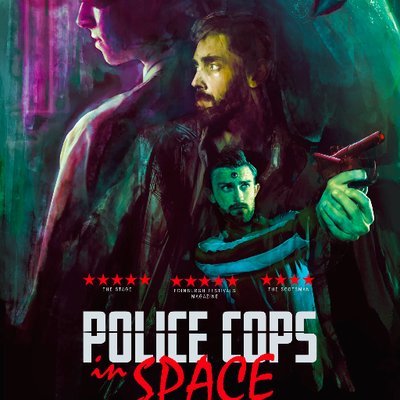 Police Cops in Space is the sequel to last year’s sell-out success, Police Cops. Whereas last year’s offering was a seriously silly pastiche of 70s cop shows, this year we have the same concept – the mission to become the ‘best damn police cop, ever’- but with a whole heap of sci-fi silliness instead.

All three performers in The Pretend Men are charming, and, as with the first instalment, Police Cops in Space uses a lot of corny jokes, flashes of well-tones flesh and a heavy dose of homo-eroticism to propel their story forward. Whilst I’m sure we’re not meant to over-analyse the plot, I did find it hard to follow at times as the structure of the story bounces all over the time and space continuum.

Famed for their multitude of characters and lightning quick costume changes, I sometimes found myself wondering who I was watching and how they fitted into the story, but to be honest it was generally so funny that I didn’t mind. Zachary Hunt provides a particularly geeky off-the-wall humour as the annoying space pilot, Ranger, whilst Tom Roe plays a ridiculously perverse ex-cop janitor who’s in love with his own mop. Ramping up the homo-eroticism, Nathan Parkinson plays a freakishly sexual robot which contrasts nicely with his main role as naive trainee cop, Sammy Johnson.

More than the speed and the ludicrous list of characters is the sheer physicality of the piece. Any moment when they can throw in a few dance moves they do, if they can re-enact the speeding wheels of a motorbike or a jump through a time warp they will, and the piece de resistance was the slow-mo, strobe lit, three-man fight sequence which they did both forwards and backwards.

Whilst the story wasn’t as slick as last year, The Pretend Men have even more energy and more moves than before.

Police Cops in Space plays at the Pleasance throughout the Fringe (not the 14th or 23rd).