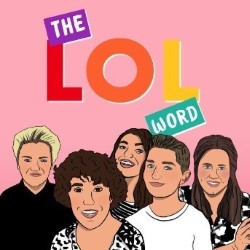 The LOL Word are a queer comedy collective bringing some of the freshest LGBTQIA+ talent to the Edinburgh Fringe. Offering a mixed bill of queer women and non-binary comedians, stars Chloe Green, Chloe Petts, and Jodie Mitchell had us crying with laughter.

Chloe Petts is a compelling host. She creates a welcoming atmosphere, before making you snort and howl at jokes about early crushes, big-dick energy and Bradley Walsh. Chloe’s infectious energy sets a good tone of what is to come, and you can’t help but applaud her insightful comedic talent.

Queer comedian Chloe Green gifted us with jokes about the patriarchy and life as a Labour Party staffer. It seems that finding love in the Labour Party office is much harder than you might think, especially when you spend your day making sure that Jeremy Corbyn doesn’t tweet too much about manhole covers. Mambo number 5 may not exactly be the feminist anthem you’d accompany with this show, but sing along and you might just make Chloe’s night. Jodie Mitchell delivered witty jokes about being the school’s poverty mascot and bringing a partner home to meet the family. Jodie’s caricature of God was painfully funny and left the audience wanting more. Singing about floods, celebrating butchness and combating transphobia, special guest Grace Petrie brought her unique talent to the stage. An absolutely sensational headliner for the show, Grace is a feminist, protest, folk singer songwriter who’s warmth and humour won over the audience.

It was an absolute joy to see queer female, non-binary and trans comedians taking up well deserved space at the Fringe. Playing sold-out shows, this collective have definitely established themselves as exciting new talents on the comedic circuit, and if you’re a fan of affordable, inclusive, abundantly queer comedy I would urge you to go see this show. Who knows, you may even come twice! (This was a pun from the show).