Combine a pinch of Grease with your average American chick-flick, mix it together with a big dollop of ladies night sentiment and you have the fun, bubbly and fabulously sound-tracked musical that is Vanities. 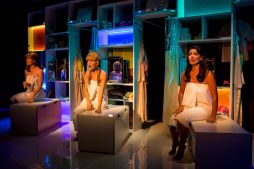 In its European debut, the musical explores poignant themes of unmet ambitions and expectations as well as sexual liberation and the role of women. An audience member could be forgiven for interpreting this as a two hour damning indictment of insular upbringings and the lack of perspective or worldview they afford…
…Fortunately, the regular upbeat musical numbers kept me from getting too heavy on the moral analysis and after marvelling at some of the Hairspary-esq style wigs, I sat back to enjoy the ride.

On a set so niftily, space saving-ly designed it wouldn’t have been out of place in an Ikea show room, Lizzy Connolly, Ashleigh Gray and Lauren Samuels (or Joanne, Kathy and Mary) move seamlessly from scene to scene and song to song, to show the affect that growing up and moving on has on three friends from an “old hick town” in America. Fair warning, these vertebrate-rattlingly powerful voices, combined with the intimate interior of Trafalgar Studios compels me caution you that this is not a show for the delicately ear-drummed. 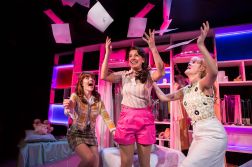 Funny, thoughtful and impeccably composed with some truly beautiful harmonising, the music is what made this show such a winner for me.
Racky Plews’ direction complimented the soundtrack perfectly and props to her choreography for the short tap sequence, I do appreciate a well-timed tap-step-ball-change when I see one.

So with this high praise, why not five stars? Well, this is some pretty strong cheese. Combined with the cosy venue and almost aggressively pink set, I found myself gagging somewhat by the time a medley on how life is a “mystery” but these girls are each other’s “history” was being sung.
If however, you like your cheese with enough punch to put hairs on your chest (as my father has charmingly been known to say) then this is definitely not one to miss.

Vanities the Musical plays at Trafalgar Studios until October 1st