★★★★ A Fresh Take on the Oedipus Tale

The stage is filled with a large cage that functions as a prison and a basketball court. As the audience files in the prisoner inside the cage sits with his head in his hands; he does not seem comfortable with his own stage presence. T (Trevor White) begins the performance by explaining how he wanted to make a piece of documentary theatre about patricide. He goes on to add how difficult it is working with the Home Office to get a convict to perform on a public stage. Having a real-life father-killer on stage really cranks up the tension in the audience. Or rather, the idea of having a real convict on stage is enough to bait the audience; it’s the self-reflexive tone of T’s commentary which sets us up for an evening of clever meta-theatricality. 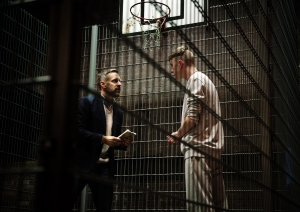 Written by Franco-Uruguayan playwright, Sergio Bianco, and directed by Daniel Goldman, we are invited to partake in a puzzle that is both fascinating to watch and uniquely comical as it unfolds. T is joined on stage by Freddie (Alex Austin), who has been chosen- we are told- for his close resemblance to Martin: the patricide who T has decided to make the focus of the play.

In this two-hander we see two relationships develop on stage; the benevolent director (T) and the earnest actor (Freddie) which is played alongside the sensitive playwright (T) interviewing his vulnerable, volatile subject (Martin played by Freddie). The movement between these two relationships is so fluid that at moments it’s hard to tell which layer of the performance we’re watching- that is, if we’re watching a play within a play it’s sometimes hard to tell which is the frame narrative; they both seem to have a causal effect on one another. 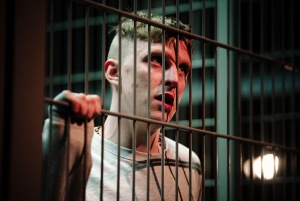 If this description of the production sounds a little dry then I am doing it a huge disservice. The performances from White and Austin are exceptional, and the slowly leaked details about how Martin killed his father are chilling enough to satisfy any Nordic Noir viewer. From a performance point of view, Austin was captivating in his ability to slip between the characters of Freddie and Martin, underlining the fact that what we’re seeing here is not a documentary play but a commentary of the way life is manipulated to create art. If Thebes Land is the true crime of the theatre world it paints a satisfyingly complex picture of the relationship between father and son, playwright and actor, and, truth and fiction.

A production by Arcola Theatre and CASA Latin American Theatre Festival. Supported by Arts Council England Grants for the Arts.