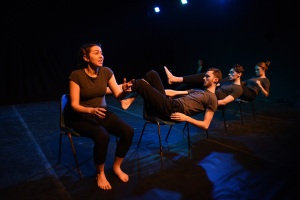 2016 wasn’t a particularly great year for most of us, so Red Belly Black Theatre Company have interviewed a host of participants to find out where they see themselves in a year from now, with the intention of sending us away with a little bit of hope for the future.

Playing back the recorded responses, the 5 strong cast lip-sync them to the audience. It’s a strange but effective way of approaching verbatim theatre, which some of you may remember me recommending last year when Theatre With Legs performed a similar piece at Pleasance Theatre called DIGS. The difference between DIGS and this show is the level of narrative built around the verbatim accounts. In DIGS the company crafted a story using the stories of others, whereas A Year From Now is simply one story after another- a little like a live-theatre Creature Comforts or The Listening Project (for any Radio 4 fans). 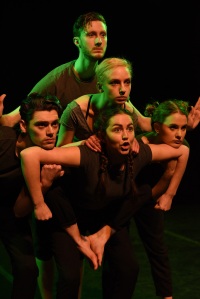 In some ways there is nothing at fault with this; the stories we hear are powerful in themselves, from people who have recovered from serious health issues to parents and teenagers who are moving through huge periods of change in their life. However, despite the obvious focus for the project the production seems to falter at points, either because the accounts become overly long or a little unvaried in the way they are delivered.

There is some clever use of physical theatre to accompany the stories- think Frantic Assembly Chair Duets. The most dramatically pleasing moments are when the whole ensemble work together to tell a story- sharing the words of one voice and bouncing it around the space from actor to actor. Equally, I think there are firm favourites in the subjects chosen for the project. In particular, the older couple who spoke of mundane things (rather than tragic or life-changing matters) and who affected the audience the most. A note must be given here about the charity the group worked with to produce this show, Mind, which helps to put some of the stories in context. Exploring mental health is a fine motivation for a piece of theatre, but I wanted the company to do more with the stories they had been given access to.