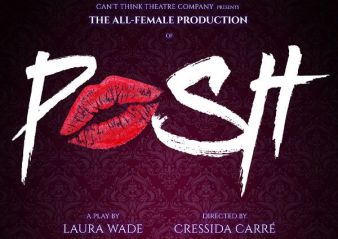 Posh is a polemic on the class system, which gained much of its original salience from playing while the election that brought the Bullingdon Club into office was going on. As the late, great Peter Cook opined, its success was exactly as great as the Berlin cabaret scene in the Twenties was in destroying Adolf Hitler. So, a proud but broken pedigree.

In this incarnation the play has an all-female cast, while retaining the script with all its sexism and gender identities to the fore. There is perhaps a whisper that we can learn something about Theresa May but I think not: while the play utterly nailed the Cameron/Osborne/Johnson nexus, it feels like the latest crop of politicos have come up by a slightly different route.  One cannot imagine the vicar’s daughter at The Riot Club.  Perhaps we need another play charting her rise.

This is not to say that the piece is less powerful than it was; it is obvious why it was such a hit when first staged. But the re-casting changes the resonance and does mute the message somewhat. The programme notes invite us to consider that the actors are not playing men, but are rather fulfilling the roles that men play. I am not so sure that this works.  The play requires that they are men, genitalia and all.  There are two female parts – a waitress and a prostitute – both played by Toni Peach – and they stand out in contrast to the grotesquerie of the men on display as the most human and empathetic characters we meet.

Some performers have still to fully inhabit their roles. Ten cast members is anyway a large number to differentiate, especially when they are playing against their gender. As with any ensemble piece characters come in and out of focus, and it doesn’t help if we can’t quite remember who they were in the first place.

The play starts to ignite just before the interval when the Janus-face of the upper class is laid bare by Alistair, outstandingly played by Serena Jennings. She encapsulates an upper class entitlement which presents itself as perfect reason until the bar manager leaves the room to be set upon with a breathtaking viciousness.

Some of this fire is brought to bear in the second half when the attitudes and self-righteousness of the first part of the play come home to roost and the reality of their attitudes are exposed. Readers of Donna Tartt’s ‘The Secret History’ will find many echoes here.

This is a well-made play of the old school, and may become great over the course of the run. The direction by Cressida Carré is good and the music and mise-en-scène generate excitement. So far, however, there is too much of a gulf between ambition and execution.

A word about unreserved seating. The old Ryanair stress levels rise but it is not really an issue in a venue like this with good sight lines and excellent raking, so fear not.

Posh plays at the Pleasance until April 22nd.