Letters from Everyone: Drayton Arms- 4 Stars

A boy is murdered on the streets of London in the early hours of the morning. He is stabbed and left to die on the pavement. But this isn’t a gang-related crime, it’s the death of a middle class, university student, which somehow means the police take the investigation more seriously. 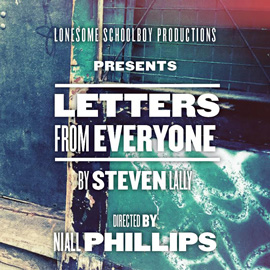 The homeless girl, Sam, is an interesting character; she reads Dickens and would be a match for any debate speaker. Her intelligence is overlooked by the boy’s father, however. Naturally, he doesn’t appreciate the idea that a homeless person is using the site of his son’s death as a ploy to increase the money made through begging. But he is wrong about Sam; she’s not using the memorial for financial means, it’s the place where she meets her only friend, Jamie, or ‘Posh boy’.

In this tightly wrought play, all four characters’ lives are interconnected and all have an important part to play in solving the mystery of the boy’s murder. This play isn’t a murder mystery, however. At its heart is a commentary about grief, and the guilt and pain associated with death. The lynchpin of the cast is Sam, played by Amy Cornwell. Her character is the most volatile and the most vivacious, and she is played by Cornwell with a pleasing balance of raw honesty and sassy humour.

The playwright, Steven Lally, has been nominated for an OFFIE, and deservedly so. The whole piece is well structured and the audience is made to feel in safe hands as the plot progresses. The monologues are fresh and sensitively written, and Lally has worked hard to avoid clichés in the expression of grief. My only grumble is that the final scene lacked a sense of finality because the cast returned to the sequence of movements they used to open the play, instead of remaining with the tableau of Sam and Jamie. That’s a small gripe, however, and overall this is Fringe theatre at its best. As a final point, as well as recommending the play, the venue- The Drayton Arms– is new on the fringe scene and is a welcoming and, all-importantly, sizeable space, and worth checking out as a place to get a good glass of red and watch quality new writing.