Only a couple of weeks ago was The MiddlePeg at Soho Theatre watching a coming of age story about a guy from Herefordshire, and this week we have a story in a similar vein about a girl from Wales making a break for it in London.

Seems like Soho Theatre knows it’s on to a good thing with these rural touring theatre companies; fresh ideas, fresh faces and a certain je ne sais quoi that they exude which, for want of a better word, is their unLondonness.

Hiraeth is performed by Buddug James Jones and recounts her own journey from furthest Wales to bustling London in order to study art at university. In deciding to follow her (he)art she leaves behind her boyfriend, her parents, her village, and her family farm of four generations.

It’s a show about finding your way while also trying to stay hold of your roots; hence the title Hiraeth– a Welsh word that doesn’t translate exactly but loosely means a longing for home. And Buddug and her co-performers, Max and David Grubb, convey all the bittersweet nostalgia for home with comic panache. Buddug and Max dart around the stage re-enacting key moments from her story; from the Young Farmers Ball (with its copious amounts cider & black and portaloo tipping) when she decides to leave Wales, to the desperate attempts of her parents to stop her from going. 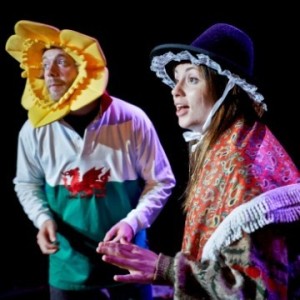 Max Mackintosh does a sterling job of playing all the supporting roles, and his boundless energy is nicely contrasted with David Grubb who says barely anything at all but provides a necessary level of understated comedy. And, all the while that this trio is madly moving around on stage, Max and David provide continuous musical accompaniment, whether it’s a straight songs or comedic sound effects.

It some ways, although they are all very talented, the story and their method of playing it out isn’t very original, but it’s their ingenuous, genuine sense of fun that carries the audience along with them. And, while Buddug may claim that she is not a trained actor, by the end of the performance she certainly has charmed the audience. It’s only on in London for a couple more days before it continues its tour of the UK, but it is definitely worth seeing: funny, endearing and, with the addition of homemade Welsh cakes, it’s tasty, too.

Hiraeth will be touring the UK until June 2015. For more information check out their facebook page: http://www.facebook.com/HiraethTheShow